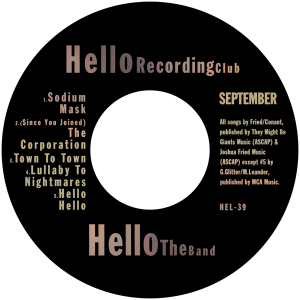 Many of you HELLO subscribers may remember getting a peculiar disc in November of 1993. The disc, performed by something called "Hello The Band", was filled with amusing dance music diversions like "Since You Joined The Corporation" and "Town To Town", as well as a creepy samba, "Lullaby to Nightmares", and a cover of a Gary Glitter song. Production credits honored to our man Flans and another familiar name to TMBG collectors: Joshua Fried, purveyor of all things sculptured of sound. But who's this guy Rolf Conant? Ever the guisemaster, Flansburgh refuted the charge of posing as a German dancemeister in our 1994 interview. Yet, as many of you know, our sneaky friend's full name is John Conant Flansburgh. Mystery solved. Apparently. But what's the deal behind this disc, you ask? We asked Joshua himself to give us the lowdown on this unusual project.

Hello's unusual sound meshes clunky, Macintosh-sequenced keyboard spasms with fluid drum loops and liquid bass work by part-time Lounge Lizard Eric Sanko. The reversal of roles within Hello was a large part of the project's success. Joshua, long known for his avant-garde electronic and stage pieces, was in fact responsible for the more conventional aspects of Hello. Conversely, Flansburgh was the madman at the dials, punching up an alien harmonizer for the vocals on "Hello Hello" among other peculiar effects.

Joshua was also responsible for the design of HELLO's cover. Although Flansburgh had drawn the cigar-chomping Hello bird, Joshua suggested that perhaps the easiest way to represent Hello the Band was simply to paste two birds adjacent to each other. The idea was described to Flans's cohort Marjorie Galen by phone, and she prepared the paste-up.

The listener is introduced to Hello The Band with a snatch of unidentified female voice and the more readily identifiable sound of vinyl hiss. The Macintosh kick-starts, sounding as if it had been violently awakened from a deep sleep, and pounds out a bizarre industrial 4/4 march crossbred with a Halloween death disco. Fried explains this bizarre introduction. " 'Sodium Mask' is based on what I call the "MIDI Hell Theme Song"--the style created by mixing up MIDI channels and having keyboard modules play note numbers intended for percussion and vice versa." In other words, imagine handing drum music to a pianist, bass music to a percussionist, etc.

The second track is an amusing soul/dance fusion titled "Since You Joined The Corporation", Flansburgh's tale of love lost to corporate domination: "Since you joined the corporation, you've been acting kinda strange," he coos in a Prince-like falsetto. The jazzy stomp-along is embellished by Sanko's walking bass lines and Joshua's hyperactive organ stabs.

Joshua steps to the mic for "Lullaby To Nightmares," an unusual song bearing the terrifyingly strange opening line: "Have you ever seen a bloody egg, drink in hand, lying up in bed?" I learned that the lyrics were adapted from "Travelogue", a performance piece of Joshua's in which a speaker with headphones is read the words and repeats them aloud without having heard them before.