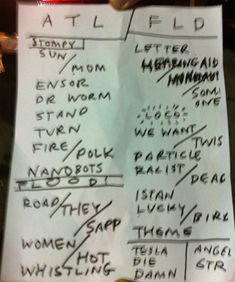 It was a quiet evening... Solemn, likely as a result of They Might Be Giants' decision to move to Australia. But not all hope was lost. As Moon Hooch took to the stage, it became clear that they were going to perform an all Moon Hooch set list. Featuring the songs off their hit album… called Moon Hooch. But nothing could have prepared them for what was to come… Though a rumor had hinted that They Might be Giants were in fact going to play at the Variety Playhouse in Atlanta. A rumor started, ironically enough, when They Might Be Giants themselves listed the Variety Playhouse among their tour locations on this leg of the tour… this hairy leg… of the tour. And when the night before the show, they announced that they would return the following night to play through the entirety of the Flood LP. A feat which had not been done by any other band in They Might Be Giants. And one that they themselves had not accomplished in recent history; as it had been six days since last they played the LP in Charlottesville on the 9th.

Much to the surprise of some… They might be giants forded the stage, like a stagecoach might ford a river… if you wanted the stagecoach party to die. The musicians were clearly at the top of their game, despite the lack of familiarity with their surroundings. Being so far from their hometown of Brooklyn, a small farming community in upstate Long Island. But they played the stage as if it’d only been yesterday that they’d been on stage at the Variety Playhouse. The Variety Playhouse being the most posh and sophisticated concert stage in Little Five Points.

It was an evening of newness. One thing was certain… Dan Miller was trying something new; A Gibson ES-335 electric guitar, which may’ve not been new at all. But I don’t always pay close attention to Dan, though with his new and elegant mustache, it’s hard to keep your eyes off his manly facial structure and delicate upper lip. A new man stood before us… A mustachioed man.

Danny Weinkauf also featured new red pants… and by pants, I mean shirt. The Shirt of Moon Hooch being worn by Danny filled the audience with shame at their inability to look as cool wearing our new Moon Hooch T-shirts. His Ampeg Amplifier stood half stacked behind him awaiting his electric signals to be translated from sound, to an electric current which it would convert back to sound, was watched over by what I assume is a severed and shrunken spherical head which didn’t move throughout the entire performance.

Marty Beller on the other hand, had a new tambourine, which was still wild and needed breaking in. To do so, he struck the tambourine over and over, creating an atmosphere of dominance to let the Tambourine know exactly who the tambourine man was.

The show began as a hushed audience cheered wildly, completely misunderstanding the meaning of “hushed”. A set of dueling Fender Telecasters competed for our listening ears, John Flansburgh on the Left-handed blue one, and Dan Miller on the Red non-left-handed one. The competition was fierce, but soon tragedy struck. Dan Miller broke one of the strings on his guitar… I think the third one… “G”, for all those who count. This was a devastating blow to Dan, who had only his Gibson ES-335 to fall back on. An unproven Guitar. Quickly, Dan traveled for miles to the Stage right bench where a wise village elder took the Electric red Telecaster and began the healing process. Flansburgh’s lead was so solid, and he was so full of energy that a humming began to enter his head. Caused solely by the scented energy erupting from the well cleaned audience… Either that or it was from a loose wire on the Gibson that Dan was stuck using while the Wiseman repaired the Telecaster. When it was repaired, the Wiseman flew by jet to the Stage left area where Dan was eagerly awaiting the return of the Telecaster. Thus he was able to finish strong, cementing his place in history as perhaps the greatest guitar player in They Might Be Giants.

Throughout the evening, Danny, Dan, and John took turns standing in front of Marty’s Drum set. Unbeknownst to the audience, this is because Marty is very unpredictable. And without the interference of the three mobile members of They Might Be Giants blocking his way, Marty was likely to leap out, over the drum set to seize upon the crowd. Creating the world’s first and most painful, human drum set. That night, Marty Beller also won an award, for most tongue’s visible presence at a They Might Be Giants show. With a total of 49 minutes outside of Marty’s mouth, he completely shattered the previous record set by John all those years ago.

The evening continued. Words were said. Words were forgotten. Dirty looks were exchanged, presumably about the forgotten words. Lights were shone, A disco ball was discussed… Jokes were made about gun control which was more humorous than the southern crowd allotted laughter for. But one thing remained certain; Between Dan’s mustache, Danny’s lower lip tickler, and John’s strange Mustache/goatee/thing… It’s up to John or Marty to develop large Muttonchop sideburns in the style of Martin Van Burren to balance out the facial hair collection that is clearly being amassed within They Might Be Giants.

The victorious show was a huge success which caused much rejoicing in the village of Atlanta. The deeds and heroes of that night will have their praises sung for years to come; especially, since the next day was a Monday, and many people would go back to work and tell coworkers about the show the night before. Yet despite this obvious and unquestioned victory, Every Silver cloud has a black lining… or something. Tragedy struck when after the show Marty and Danny left They Might be Giants to join the audience on the floor of the Variety Playhouse. Marty handing his drum sticks to audience members, they both symbolically put an end to the years of playing with They Might Be Giants. Though, fans needn’t worry. A reunion was scheduled on the two day anniversary of that show, to be held in Brooklyn in the Academy Records Annex. Perhaps, if we’re lucky, on that day, a new Chapter will open in They Might Be Giants history, and the band will be together again. But that’s a story for another day.