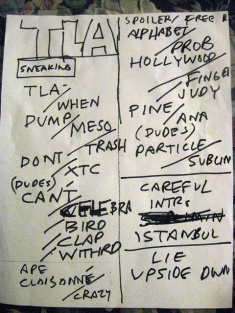 After being stuck in horrible (horrible) traffic on the drive to Philly with Lekker, there was much pleasantry to be enjoyed waiting on line (in a sketchy alley). Met with Kelly, magbatz, and some other folks. Thanks to Kelly's friend John, we were all—except, sadly, magz—able to get into the TLA earlier than most with some super-nerd passes (known in some formal contexts as "fast-track passes") and managed to stand right up in front. Luckily, magz ended up right behind us.

After a bit more waiting, JoCo came out with his band right around 9 (very punctual). His set was a lot of fun, and is available here. I sort of felt bad about not knowing the words to anything except "Still Alive".

At around 10:00, TMBG (including Dan) took the stage. "Philadelphia" was fun and we did a little compressed version of the T-L-A dance. There was a lot of bouncing around. During the instrumental ending of I think "When Will You Die (which Flans called Join Us's first single?), Flans shouted "Kid Rock", in the style of Kid Rock himself. "XTC Vs. Adam Ant" was a surprise (sort of, Kelly had mentioned that they had soundchecked it yesterday) and was lots of fun live. I had a good/tiring time pogoing to Birdhouse. Flans divided the whole theatre, including the people who were up in the balcony (Flans was not happy with their seated status), for the battle of the planet of the apes. He claimed that it was a tie and the furious apes continued chanting (JF: it's still a tie).

There were some other bits about the 60's (JF: if you have to remember, you weren't there, man). After John and John rejoined the band sans sock puppets, John Linnell was totally camera-whoring. At one (previous) point, he had snatched a camera from the audience and waved it around over the keyboard. Flans, on the other hand, was a bit more reserved. Finishing off with "Subliminal" was really cool. The band was called back out for both encores with more "APES! APES! APES!" chanting (the people just could't compete). The show didn't end till midnight (or, according to the clock in the TLA, 11:59). Everything was rounded out nicely with "Doctor Worm" (JF: by request of that drunk guy).

This show was so exciting for me! As usual, I brought my mom, but my friends Max and Dylan, and a friend of Dylan’s came with me as well for their first TMBG concert! And at the TLA to boot!
We lined up in front of the TLA, only to be told the actual line was in some shady alleyway. While standing awhile, Kelly came to visit us and we all signed a birthday card for Dan. She then informed us of the fast-lane tickets, which we were told by another fan, were sold out, but Kelly insisted we try anyway. So, I did and succeeded! Kelly’s the best!

It was great to see Jonathan Coulton again, only this time with a band! When I last saw him in Asbury Park, he was solo. It was nice to hear songs off of his new album, like “Sticking it to Myself”. Hearing his “older songs” like “Code Monkey”, “Shop Vac” and “Still Alive” were a treat too! I love when he opens!

Song wise, there was a great variety! TMBG started out with “Philadelphia” which was absolutely amazing! I’ve never been to a show where They’ve started with the venue song. Later in the show, they also played “Hollywood”, a nice treat for the east coast! “Battle for the Planet of the Apes” was fun too, as it ended in a tie, which the band has claimed has never happened before! “Spoiler Alert” had me in hysterics with the Avatars of They announcing that they are now sponsored by Epic Fail Bologna Sandwiches. Meg Ryan also made an appearance with the Avatars! Hearing “Subliminal” was a real treat, I love everything about that song!

The second encore of the evening was very exciting. Dylan (who, I must correct, was not drunk, just an excited young man) kept yelling out “Doctor Worm!” and as such, the band launched right into it! They didn’t even have it on the set list! They were going to play “Upside Down frown”, but honestly, They made the right choice by finishing with “Doctor Worm”.

Marty and Danny came out after the show to sign autographs for all the fans. I got my 3rd drumstick and 11th setlist, which were signed. Danny also signed my instant fan club certificate! My friends, my mom, and a girl named Rebecca all waited outside after the show to see if we could meet anyone else and we did! Flansy signed the guys’ shirts; I got my set list signed and picture taken with him. JoCo was popping in and out trying to pack his things up in a van (which he beautifully parallel parked), but still had time to sign things and take pictures. A wonderful night! And, I hope They come back for New Year’s and play a Lincoln show!