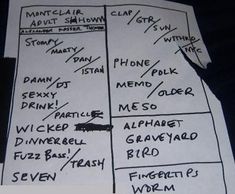 Well after getting lost on the way from Middletown, NY to Montclair, NJ, we finally stumbled upon the Alexander Kasser Theater.
And my, what a show.
Before the whole thing started, I met a good friend. Pretty cool guy!
The seats completely killed the show, IMO. There was no room to jump around or anything. I felt like a little dork when mostly everybody stood still during Birdhouse and I was rocking out alone.
The opening act I didn't care too much for. I mean, the drummer was amazing, but the music sounded (and looked) a bit like Meatloaf. Don't get me wrong, Corn Mo's awesome when he's rocking out with TMBG, but I didn't like them too much. It was VERY long for an opening act, and I just wanted to see TMBG. I also remember during the intro to one of his songs, some girl was yelling out things, Corn Mo stopped, and he was like "hey, this isn't a dialogue" and basically told the girl to shut up. That was a good one.
Speaking of opening acts, they played the Venue Songs DVD before Corn Mo. It was pretty cool!
Also, John Linnell only used the accordion thrice (Drink, Particle Man and Doctor Worm). That made me a little sad too.
Dan Miller couldn't capo his guitar correctly during his Istanbul acoustic solo. That gave me a good laugh.
Whoever was sitting in the back got to move to a better seat, because during Clap Your Hands, Flansy asked everybody in the back to run up to the front. Isn't that nice?
Bringing back Phone Calls From The Dead from the 2007 tour was nice. On our way to Montclair, we found a graveyard, and John Linnell referred to that same graveyard during the segment. Haha.
I also liked when it was like

But I'm tired, I'll upload 2 videos tomorrow, and hopefully someone will fix up this nice setlist.
Also, to whoever said "West Virginia my mom!", hi! (Yes I was that kid that kept requesting random State Songs during banters.)
If you saw me, kid jumping around and screaming, red/grey striped shirt, say hey!
Thanks for the show, TMBG!