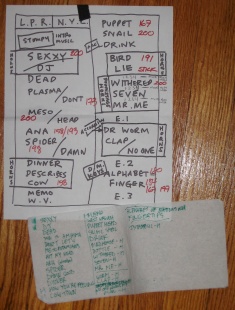 What a fucking fantastic show. I've been dying to hear them play "S-E-X-X-Y" and when they opened with it--with no preamble--I nearly fell off my chair. And "Withered Hope", which blows me away every time. And the audacity of closing with one crowd-pleaser after another. And the venue was really great. And the audience was phenomenally energetic and happy. And we ran into tons of friends. When we headed home, we walked up to the next subway stop because we were too giddy and energized to get right on the train. Wheeeee!

An outstanding show that almost played like a greatest-hits set, with a higher-than-average selection of singles performed. A few of my favorites were performed that I haven't seen in concert since 2000, including opener S-E-X-X-Y, Lie Still, and No One Knows My Plan. The two-song Apollo 18 rarities segment in the middle was amazing (the harmonies in Dinner Bell were spot-on), but I was totally unprepared for the two biggest surprises of the night: Unsupervised and West Virginia. The show was billed as featuring songs from every album, but I didn't think that included solo projects! Both were played to perfection, with West Virginia sounding more sinister and rocking than the album version. Hopefully this is a sign of things to come and we can expect even more Mono Puff and State Songs in future shows.
The Sun is a Miasma song sounded as though they are still working it out, but the story behind its creation was classic. No doubt this was written for the upcoming Science album. I was expecting to hear at least one more new song, but perhaps these are being saved for the future shows.
The crazy and eclectic setlist brought me back to the TMBG shows I know and love, the perfect opening to their fall residency at a very cool new venue. I have tickets to the October show, and I have a feeling I may be showing my face at the remaining dates as well. Looking forward to an amazing fall!

Hope I'm doing this edit right (total newb in these parts). Just wanted to post as it may be the only They gig I can offer feedback on for some time. Last saw them in my home city of Sydney on the Mink Car tour (!), so it was a long drought waiting to be broken. Stupid me got majorly delayed trying to ad-lib my way to a suitable car parking location near a subway station and so I missed several songs at the start.
But that aside I had a great time and particularly enjoyed being part of a home town gig for TMBG. Great diverse selection of material, with some of my fave albums (eg Lincoln, John Henry) getting a good look in.
John (fan since 92).