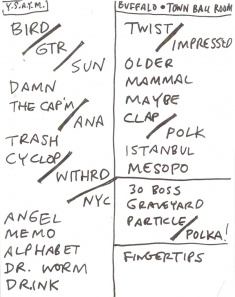 No horn section or Phonecalls from the Dead. Just a real solid show. It was our first time in the Town Ballroom and we had a great, unobstructed view from the innermost of the three tiers of railings curving around the floor.
The band took the stage to some sort of Vegas-triumphal music and opened strongly with Birdhouse/Guitar/Sun/Times. In Sun, the elements were “a failed foreign policy, a failed domestic policy and a failed presidency” and it was so hot that “steel is a gas, wool is a gas, and steel wool is a total gas”.
Midway through Cap’m, it came time for the next verse but John L. was strangely silent. After the music had gone on for a bit, he admitted that he had forgotten where he was in the song and got the band to strip it down and mark time quietly until they reached a point where they could launch back into the song at the missed verse.
In Particle Man, there was a fight between Accordion Man and Roland Keyboard. This was a reference to some earlier banter about Linnell’s abandonment of the accordion in favor of new technology (he said he was going to send off his accordion on an ice floe). Accordion Man and Roland Keyboard go to Hell and “are inevitably killed by Triangle Man”.
Highlights were Trash and a fierce Impressed. Also memorable was Boss of Me because John F. had been so impressed by the huge disco ball that had descended for one of the earlier songs that he asked for it to be dropped again for this one.
Pleasant opening set by Oppenheimer, two lads from Belfast with an airhorn. Please visit their soundman Jerry’s Myspace. --Son of Bumpy 14:16, 22 November 2007 (UTC) 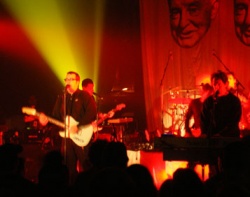 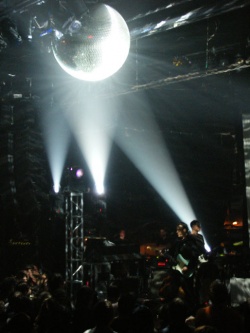