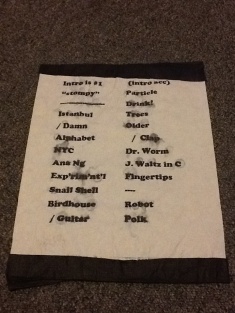 Joan Jett
— with The Smithereens, Spiraling, and They Might Be Giants opening —
Echo Lake Park in Mountainside, NJ
September 17, 2005 at 6:30 PM

Very informal, shortish set at an outdoor, all-ages music festival, briefly interrupted by rain. (They kept playing.) Flans announced that Marty Beller's wife had just had a baby and that Marty was so exhausted that he was sleeping while playing drums. Flans dedicated "James K. Polk" to Kanye West, who recently spoke out against the Bush administration's slow response to Hurricane Katrina.

Some Guy With An Foot:

Great show! Just when they started playing Birdhouse it started raining and then ended at the end of the song! Really cool show, there were like 50 people there.