From This Might Be A Wiki
< Shows
3 wikians attended: FluffySciKitten Hyperfine This Microphone 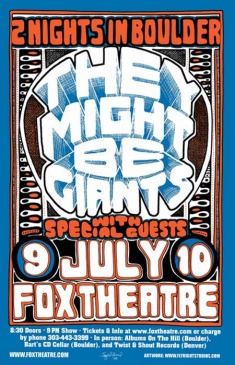 Song 7, Experimental Film, was interrupted shortly into the song. John Linnell said he had a frog in his throat and that they should come back to the song later on. He wanted to do the song justice.

The venue songs were put in the context of a story of They Might Be Giants travelling from each venue to the next. Each venue song was preceded by a short introduction to their travel from the previous city to the current city.

I did not know the name of the last song played, with Corn Mo. It was a rock song with no lyrics.

The un-named song was most likely Hocus Pocus. Corn Mo mentioned it in his blog, and the song was played in St. Louis on the 12. It was as you described, a rock song with no lyrics (some small scatting from Corn Mo), and the offical setlist at St. Louis said "Hocus" so I'm guessing that's what it was.

Early on during They Might Be Giants's show at Boulder's Fox Theatre, keyboardist/accordionist/vocalist John Linnell called a song to a premature halt, waving his hands frantically at his bandmates.

"Whoa, hold it guys," he croaked. "I don't know what's wrong-my voice is all messed up."

Though the band is known for its onstage pranks, this wasn't one of them. Holding his throat, it appeared that Linnell really was having trouble with his vocal chords.

"It's the altitude," suggested an audience member.

It was a perfect moment, neatly summing up They Might Be Giants's enduring appeal: absurd, brainy, and hilarious all at once. Even as Linnell and co-founder John Flansburgh enter middle age, their skewed worldview remains firmly in place. The band may be written off by non-fans as overly quirky novelty pop, but anyone who's given Flood, Apollo 18, or Factory Showroom a real listen knows that there's depth beneath the oddball humor, not to mention some great pop.

Fortunately Linnell was able to recover quickly from his mysterious onset of latitude-induced sickness, and he and Flansburgh led their backing band through a fine overview of songs from TMBG's now two-decade long career. Their last album, 2004's The Spine, was a bit underwhelming, but the band didn't seem particularly interested in promoting it. In fact, the best later period songs came from TMBG's two children's albums, 2002's No! and this year's Here Comes The ABC's. The funk rock of "John Lee, Supertaster" saw Flansburgh jumping around the stage gleefully, like a kid lip-syncing in his bedroom. The song, as its title suggests, tells the tale of a young man with heightened taste buds. The result, Flansburgh offers helpfully, is that "when he tastes a pear, it tastes like a hundred pears!" It's that rare example of a song that a three year old and a thirty-three year old can agree on.

The current live incarnation of They Might Be Giants is a far cry from the band's origins as a guitar/accordion/keyboard duo. Indeed, the band's career trajectory can be seen as an ongoing move towards a more traditional rock band format. Some of the band's earliest supporters may have a problem with this, but whatever: at the Fox, the punk-pop renditions of songs both old and new sounded great.

The band's most beloved tune, "Birdhouse In Your Soul", was given an irreverently revved up reading, sounding more like a Ramones anthem than anything else. TMBG may have a reputation for being twee-er than twee, but they proved that they're capable of kicking out the proverbial jams. Their blazing cover of Cub's ode to the Big Apple, "New York City", slammed this point home -- it almost looked as though a pit would break out up front.

The best part of the night, however, came when Linnell and Flansburgh abandoned the hits and played a mini-set of as-yet-unreleased songs written during their last tour, each one dedicated to the various venues the band visited. Encompassing a dizzying array of musical genres, the titles included "I Got Kicked In The Head At The Stone Pony in Asbury Park", and "Leave Your Crack Pipe At Home And Come On Down To The Anaheim House Of Blues", and "Let's Celebrate Brooklyn!" Some of the almost dozen songs in this set were pretty half-baked, but they were entertaining nonetheless. And anyway, the band seemed to be getting quite a kick out of playing them. It was a heartening spectacle to see the band's two principles, after all these years, still willing to be totally immature.

What a charming town. Nothing beats a college town out of season. I love watching the grad students and summer sessioners wandering around the abandoned village with the glaze of "what are we doing here?". The Fox Theater is a delight and we were excited to lay roots down for our two-night stint. The theater is fine club, but watch out for those many confusing levels of flooring. My intro to the place was a tumble down steps in the darkness as I navigated the Esher like floor plan.

The show was a sell-out, which is always nice. We start the festivities with a downtowny intro to Istanbul in lieu of the more traditional guitar intro. Listening to the tape I really dig this way of doing it. It sounds composed, but in reality is Flans and Linnell gesturing to the band. It brings me back to those heady days of the Knitting factory.

We're breaking out a few new ones for this run including Snail Shell, and a mini-set of Venue Tunes. Usually a guest artist reads the libretto for this but on this tour the duty falls to John and John. A future in audio book reading is assured by their confident performance.

There is an edit on this one, we do occasionally do that you know. Our performance of Trees was not up to par. And when I say par I mean way below par. At the end of the tape is a version of Trees from the following nights gig. Please excuse our vanity, but the version you're getting is much better. It's at the end so you don't think we're cheating.