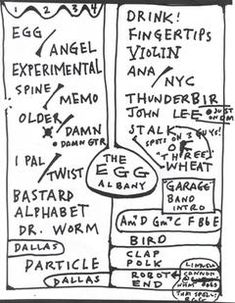 Well, I'm quite bad at remembering setlists. However, there ain't no info on this biotch! This was the second show at The Egg for TMBG. It was excellent as always. A guy calling himself Corn Mo opened up, as well as joined the Johns during Particle Man.

Opener: The Egg Song (dedicated to the venue) > She's An Angel.

At first, the accordion was way too loud, but the sound man fixed that bit up. The wave during (I believe this is the song's name) Speck Of Dust [It's called 'Violin.' -BrotherGlenn] was excellent. I enjoyed beholding the wave, as I was in the very back.

As I said, I'm really horrible at remembering setlists (especially in order). So here's a list of songs they played.

Back from the UK the band took a few days off and here we are back at it. The Egg is Albany's salute to the not to distant future (which in this case was 1983). My memory might be fading but I recall an episode of Space 1999 being filmed there.

A fine outing in this acoustically perfect venue. No highlights come to mind specifically. If you were at the show, please send me a note and remind me how great we were. Thunderbird makes an uncommon appearance and is really fun to play. I've figured out that we need exactly 18 shows in a row to get a song down. So give us 17 more and this thunder-boat will be at ramming speed.

Solid Venue tune from the Flans camp. He debuts his demo during souncheck, which, he claims, was written and recorded during his car ride to the gig. How the acoustic part got recorded while cruising at 70mph during the Atlantis creating rain is yet another of Flans' remarkable skills.