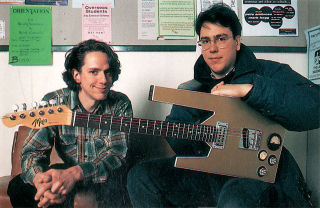 "The Mojo Chessmaster in its orignal glory".[1]

The Mojo Chessmaster is a custom-body lefty Fender Telecaster designed and played by John Flansburgh. The Chessmaster (named for its resemblance to a chess rook) was built by the NYC-based Mojo Guitar Shop during the recording of Apollo 18. It has a rosewood Telecaster neck and a Joe Barden pickup mounted on a vintage Telecaster bridge, with a second Gretsch pickup by the neck.[2] The guitar is wired for 5 pickup configurations: neck, bridge, both in series, both in parallel, both in series (out of phase).

The Chessmaster has been compared to Bo Diddley's signature rectangular guitars. Due to its unique appearance, it has been featured in promotional images and videos since the early 90s. 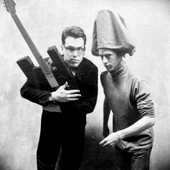 The original Chessmaster prototype was what Flansburgh describes as a "highly misguided" modification of a black, right-handed Fernandes Guitars Telecaster. The additions to the body were constructed out of cardboard, duct tape and foam core.[3] The squarish shape was inspired by the interior of the Fender guitar case, which was rectangular instead of form-fitting.[4]

In 1991, Chris Cush of the (now closed) Mojo Guitar Shop built the Chessmaster. Cush suggested elongating the "horns" of the guitar. The gold paintjob on the body was done by Pat Wilkins. At some point between its creation and first video appearance, an analog VU meter was added to the body. While real, the meter was not actually connected to anything and did not function.
There was a plan to add a black pickguard to the body, but the guard was never permanently installed.[5] The guitar was used during the Apollo 18 tour and made live appearances up until sometime in the early 2000s when the jack became damaged.

In 2011, Flansburgh was approached by Mike Buffington, who had made a replica Chessmaster. Impressed, Flans was inspired to have his guitar repaired and brought it back for the music video for "Cloisonné". Two years later, Mike provided him with a custom designed VU meter driver to allow the VU meter to work.[6]