They Might Be Giants
Markthalle in Hamburg, Germany
November 28, 1987 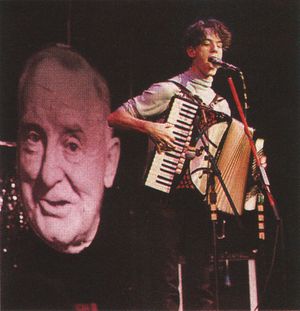 John Linnell of They Might Be Giants performing at the show with his accordion from Musikexpress magazine.

"That sort of thing only happens to us in New York gigs where a lot goes wrong. On the other hand, these disastrous gigs are always the best," commented John Linnell, accordion-playing half of the New York duo of the evening.

The audience had been asked into the foyer of the market hall - the only around 200 paying spectators would have gotten lost in the actual hall. There in the anteroom, however, it got really cozy, and when John Linnell tore the accordion strap after a few bars of the first piece, his partner John Flansburgh had the opportunity to bridge the compulsory break with a few quick jokes. The audience responded enthusiastically and the mood didn't improve when a Linnell song was cut off halfway because he realized he'd forgotten to plug the accordion into the amp.

Singing, guitar and accordion were played live, the rest was played by roadie, mixer, technical advisor, fatherly friend and girl for everything Bill Krauss from the tape. Nevertheless, this peculiar mixture of sixties pop, country and hypermodern sample sounds seemed more exciting, livelier and less static than the usual rock music played live.

Those who still didn't have enough after the various encores were referred to "Dial-a-Song", the telephone service of They Might Be Giants: On the US telephone number 718-387-6962, you can hear a different TMBG song every day, "Free if you call from your parents or your workplace," as John Flansburgh then suggested.