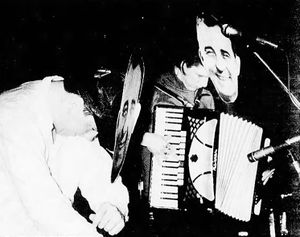 They Might Be Giants performing at the show with masks.

We reported last week on the then-upcoming appearance by New York duo They Might Be Giants. It happened as scheduled, Monday evening at O.T. Price's. and like all journalists of character, courage and modesty. we were there.

So were three gigantic two-dimensional reproductions of the head of Harry Truman suspended from the columns in the room. as well as a pile of props large enough to satisfy a smaller Broadway musical. And, in due time, those were joined by the two members of They Might Be Giants.

From the first moments, it was evident that irreverence was to be the tone of the evening. When one of the cardboard Harry Trumans began to sag and was unstrung. Giant John Flansburgh announced it as "the ritual removal of the first head," as though more ritual were to follow.

Next up was a tune named "The Sun is a Mass of Incandescent Gas," a kind of Irish-jig tune begun with, and repeatedly interrupted by, Giant John Linnell's mock scientific commentary such as "The sun is nearly 30 million miles away front Earth! ...which is why it looks so small.”

"Hide Away. Folk Family" was next, a mock Appalachian ballad in which a group-led audience scream formed the lead instrument in the break. By this time in the show, the Giants had most of the crowd firmly in their entertainment grip, and used their hard-won influence to produce lots more nonstop fun.

“Rabid Child.” featured flat cardboard hats with yet more facial reproductions mounted on them. "Where Your Eyes Won't Go" offered, as had been promised, a six-loot tree limb (used as a vertical kick drum) and for the next tune the duo mounted velvet headgear taller than themselves, saying: This is our favorite part of the show. because these hats crush and scramble our brains and make us vote Republican.” The crowd whooped and jeered, just as wildly as they cheered one of only two cover tunes the group does, the half-century-old "Take Me Back to Constantinople.”

There were other songs whose names we don't know, and lots more playfulness. and lots of applause and laughter. The show then veered toward the heavier She Was a Hotel Detective." which featured harsh. gaping and musically super lead guitar work, and "Don't Let's Start." which offered more, and better.

At that point the duo said their thanks and quickly darted from stage. and would not return for quite a while despite pounding and screaming from the crowd. We wondered why for a minute or so. and then noticed several odd things: that someone we'd barely listened to was shouting. as he had been during the entire set, the names of various old rock songs. demanding them: that some audience members we'd seen immediately to the front of the stage were attempting to pull some of the Giants' things off it, and that one particularly molelike moron of a young woman was pounding Linnell's microphone with her fists. attempting to induce a steady rhythm in the room.

Eventually that rhythm had its way. and the Giants returned to perform "Number Three," a country-style tune with parodic lyrics. They then fled again. at which point the mayhem at stage-front resumed.

We went to talk to They Might Be Giants, and they told us why they'd wanted to get off stage: not only were a group of "hardcore kids” and several ill-behaved drunks harassing them during the entire show. but someone we'd only dimly noticed do so had, despite their repeated requests, kept tossing popcorn until hitting the duo in the eyeballs. at which point they decided they'd had quite enough -- and simply left.

It's a testament to the professionalism of They Might Be Giants that their act so little reflected their entrapment by idiots that most of us weren't even aware of their plight until the end of the show. It's also an indication of how commanding the group's act is: their performance so entranced most of the audience that the oppositional neurotics present had to actively attempt to combat the group mood.

But though Messrs. Flansburgh and Linnell were treated to a defective version of the usual Santa Cruz welcome. they treated us very well in return, let's hope we can return the favor, and soon.