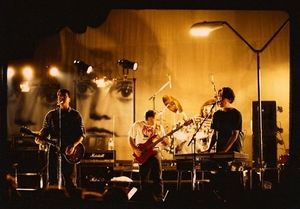 They Might Be Giants performing at the venue. (Photo by Myles Mangino)

"They were pretty good, loud and clear. The view of the band was good from the pit, but it was hellish down there. I had to bail to get a drink of water after less than half the show. The mix wasn't so good from the lower tiers. Drums too loud, bass and guitar too quiet. Thought 'Particle Man' and 'Birdhouse' didn't come across well in the rock band format, although most of the John Henry songs sounded great. 'Sleeping In The Flowers' was good. I thought 'Spy' was great fun, especially when John L was conducting the band AND the audience, but he wasn't as good as Zappa. 'Dirt Bike' was good, 'AKA Driver' (which is still running through my head), and as I said most of the songs from the new album were great. Liked the streetlamps on the stage, especially during the new hard-rockin' rendition of 'Why Does the Sun Shine?', where the lights went down towards the end of the song, the streetlamps came up, and the setting sun (part played by a spotlight) disappeared in the west. Excellent. No profanity from the band as far as I could hear. You could tell They've been working on 'Frankenstein', They are closer and closer to the original version. And you can tell someone's been telling Them things from The List: They introduced 'Statue Got Me High' (which was fairly decent in rock band format) by saying that someone tells Them that it's about 'Don Giovanni', even though They didn't know it when They wrote it. Good strobe lighting during 'Frankenstein' as another person pointed out yesterday. I thought the encores were pretty good, but I heard another person say as he left the venue that he thought the encores sucked. To each his own."

The geeks were out in force to see They Might Be Giants on Sunday night -- and I mean that in the best sense of the word.
On a rainy Sunday evening on Market Street (it looked like the opening pan of "Interview With the Vampire," which was filmed nearby), Giants fans swarmed into the Warfield looking like the dweeby music idols that would soon be on stage. Outward appearances notwithstanding, all would come away a little hipper for taking in one of the best Bay Area shows of the year -- by a band that is all but a well-kept secret.
Jumping on stage to the chords of a taped game-show introduction, John Flansburgh, the Elvis-Costello-only-chunkier guitarist, and John Linnell, the lanky keyboards and horn player, had the crowd in a frenzy before the first compression of Linnell's accordion.
After running through bare-bones versions of former hits -- as if to remind the crowd who they were -- the black curtain came up to reveal the band's new, expanded lineup.
A street cabaret of a stage show, complete with free-standing street lamps and lights flashing sunset colors, showcased the new horn and percussion sections, adding new life to TMBG's polka-rock pizza.
With all members now prominently featured, the band dived into a 28-song set that featured more than half the music from their latest release, "John Henry," as well as almost every favorite from their past four discs. For fans involved in the front-row chaos, these older hits apparently provided the best excuse for throttling into each other with the greatest velocity.
The immature "Don't Let's Start" was perfectly intoned in Linnell's signature nasal twang, while "Ana Ng" was given a guitar-heavy make-over that transformed it from almost pop to almost punk.
New songs such as "Subliminal" and "Snail Shell" were played as soundly as they were in the studio while "No One Knows My Plan" had enough style to get the crowd of body surfers to stop and form a conga line. No joke.
In addition to being entertaining, the show was a 90-minute lesson in musical versatility and structure. Brian Doherty's effortless drumbeats provided the backbone of the songs and a metronome for bobbing heads. The horn section of trumpeter Jim O'Connor and trombone and tuba player Randy Andos contributed that intangible missing layer to the They Might Be Giants sound. Most of all, Flansburgh's Gaelic-to-grunge guitar range meshed with Linnell's assorted keys and bass; this is the dash of ingenuity that should get this band the artistic recognition it deserves.
The Giants passed up no opportunity to display their ideas about what's entertaining -- from a hasty version of Soft Cell's "Tainted Love" tacked unto the end of the ska-rooted song "Spy," to the rare use of the glockenspiel (at a rock concert) on "Shoehorn with Teeth."
The Giants acknowledged and mocked the silliness of most concerts by having Doherty perform a somewhat humorous drum solo -- complete with lights synchronized to his pats, just like you'd see at a Van Halen or Rush show. At various times, Flansburgh was unleashed to run around in a forced frenzy, looking like Buddy Holly on uppers.
Best of all, the band had enough control of its ego to laugh at itself and allow everybody else to be in on the joke.


"There are musical pairings that are meant to be together and the tuba and ukulele are one of them," said Flansburgh before cueing up for "Extra Savoir-Faire," about a man so debonair there are no English words to describe him.