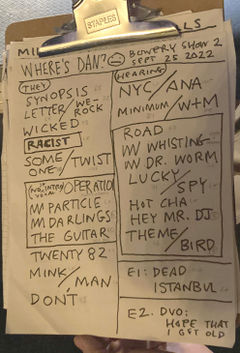 They Might Be Giants
Bowery Ballroom in New York, NY
September 25, 2022

Dan Miller was not present at this show due to a positive COVID test[1], and an issue with John Linnell's keyboard starting during "Ana Ng" necessitated him playing most of the second half of the show on accordion.

Tiny thing I need to make sure gets preserved: There were problems. Dan Miller was absent, the first half of the show was beset with a technical issue that sounded like a gun firing over and over, truly mechanical sounding, like you'd expect smoke to start pouring out of a light or an amp. And then the keyboard stopped working during Ana Ng.

After a few minutes of tech support, John Linnell says "I could just play the accordion," and the crowd cheers - John Flansburgh said something like "that would be a real thrill for our audience, and an enormous artistic limitation for you." They launch into Minimum Wage, which sort of relies on the fullness of the Mellotron-esque keyboard part and the missing guitar lick Dan normally plays. Flans has this new synthesizer pedal that makes his guitar sound like an apartment buzzer. They're playing this sarcastically-peppy instrumental while remaining still, sort of looking down and frowning, just trying to get to the end of the song, and Flans has chosen to make the ugliest possible sound over the top of it. It is absolutely hilarious, I felt like it 100% encapsulated the emotions that must've inspired Minimum Wage. Here's a video. Funniest thing I've seen on stage at any music performance. Incredible band on an average day, legendary under pressure. -j2