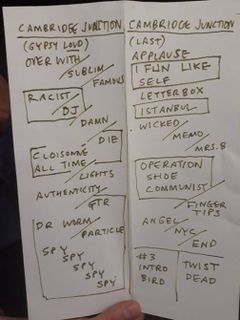 Automaton120 - My very first show! I actually purchased my ticket the afternoon before; I previously thought I would not have the chance to attend. I certainly do not regret my last-minute decision...I've only been a TMBG fan for about a year so seeing them so soon was a great surprise - I thought I'd have to wait several years for them to return to Europe if I missed this! It was a great pair of sets, with some songs I really did not expect to hear. It was so surreal seeing the band (and other fans) in person as both of these only existed online for me until that point.I was five or six people from the front of the queue, with my intentions to be near the stage paying off as I came home with a sticker handed out by Flans himself and, with one final surprise to top the night off as I gave up all hope of getting anything else, Marty handed me one of his drumsticks, which I asked him to sign. Such a memorable night, especially for my first show. I'll be sure to catch them on a future tour, wherever that may be!