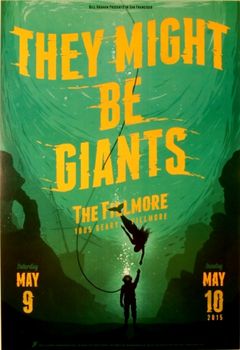 I keep checking this page whenever I see TMBG play and visit this section of the wiki, and I keep being surprised that no one has recorded the most amazing thing about the show. It's been a while, but there was one stand-out bit from the crowd that shouldn't be forgotten.

There were a few guys (two to four? Like I said, it's been a while) who came in with these huge papier-mâché helmets on, with phones on the front playing video of the tops of their (unhelmeted) heads. Couldn't figure out what they were supposed to be. Even one of the Johns pointed them out during the show and seemed confused (but impressed by the craftiness). It wasn't until the end of the show when everything clicked. The show was advertised as playing the first side of Flood straight through. So these beautiful mad geniuses realized the last song before the encore would be "We Want A Rock." I've had some pretty audacious plans come together, but it's hard for me to think of a time I was as thrilled as these guys were pointing at their rigs during the lines about buying big prosthetic foreheads and wearing it on their real heads.