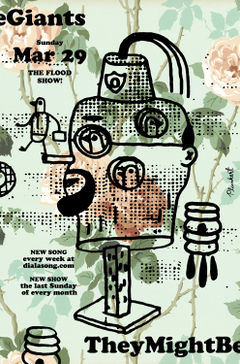 What a great show! I like how they played all of Flood as a single set, then moved on to another set with other greats and lots of new Dial-a-Song tracks, which I've been particularly enjoying. Music Jail Pt. 1 and 2 was a real treat. The Sunday night setting was pretty interesting, and I enjoyed the venue--attended with one person who was not familiar with TMBG at all, and she came away saying "I really like them. They're so funny." (The Robert Durst jokes were definitely a hit.) It's great to see them on stage again, and everything sounded brilliant. John F definitely didn't seem as energetic as the last time I saw him (2013?) but hey, when you've been making music this long I suppose there's a point where you can stop jumping all over the stage. He's pumping it out in the studio anyway so I can't complain!
Also the 'no taking requests' bit was hilarious. Everyone shut the hell up so fast! "Cross Doctor Worm off the setlist!"
Did anyone record this show? I would loooove to have a copy of it!

So. Fucking. Awesome. Flood shows are always the best.
Highlights:
JF: So what's next?
JL: Meso-mes-mes, uhhhhhhhhhh...........
Me: MESOPOTAMIANS!!!
JL: Don't say it! Don't say it! You know the rules! I'm gonna pretend that-, uhh- , oh. She's giving him the finger.
- John Linnell mentions Dr Raygun after Linnell adnomishes me.

I travelled to NYC from Brighton (UK) to see this show -- as a celebration of completing and having my doctoral thesis accepted by City University London -- and was not disappointed! Not really knowing what to expect I was a little disturbed that the taxi driver didn't know where the street was and then dropped me off saying just ask someone I'm sure they all know where it is... so on spotting a crowd of folk hanging around outside what looked like a derelict building I figured I probably was in the right place. I was quickly greeted by some other lovely wikians/IFC members/facebookers (feel free to add all your names if you wish) who took me under their wings and made sure I was in the right places at all the right times. It was a cold wait but plenty of things to talk about and listen to which added to the anticipation and really got me in the right mood.
The show was awesome. I don't think I've heard them play this well with great banter (Tiger Milk anyone?) and no silly gimmicks, since the early 90s. I had tears in my eyes several times (Sapphire Bullets and Answer in particular) and that they played all four of my top favourite songs (Birdhouse, MISLIH, Mesopotamians and When Will You Die) I couldn't have been happier. Particular highlights were Danny seeing how happy I was and giving me an absolutely massive smile, playing Flansy's guitar (and having the picture of that posted on the TMBGareok tumblr) the aforementioned "taking no requests" banter -- I *am* the lady who tangled with Zondry, but I swear to god it was Linnell that said I was giving him the finger (any other witnesses?)! And finally, getting a personalised skin from Marty which will be carried back home in my own two hands if necessary; it is way too precious to check.
Being in the front row meant the sound was rather odd, I could hear everything fine except the vocals as I got odd snatches of their singing live (i.e. not through the PA) but most of the vocals were provided by the audience around me.
I will probably never be able to come back to NYC again, so to see a Flood concert in Brooklyn, in the 25th anniversary year and have such an amazing experience meant the world to me. Thank you Johns both, all the other musicians and the lovely people who looked after me so kindly. You all made my year!