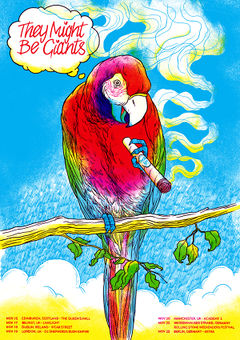 What a show in Dublin tonight. Wonder Villains were a simply amazing support act, and a band very much worth checking out. Very energetic people, they genuinely looked delighted to be playing music and being on stage. They Might Be Giants themselves were amazing, blasting through the first five songs of the set without even a hello, just pure loud energy. After that there was plenty of chatting as well as jokes galore. Gig highlights included Rhythm Section Want Ad, 32 Footsteps, Call You Mom and Black Ops (the new live version is just incredible). They seemed delighted to be back in Ireland for the first time since the 1990s, and hopefully we won't have to wait until 2030 for them to come back!

Really great night! It was my first TMBG show and it was a fantastic experience. Got there around half eight to buy tickets when someone came up and gave me a free one because their friend couldn't make it, wish I got there a bit earlier though as what I heard of the support act was great, I'll be checking their stuff out! Damn Good Times was amazing, the band was really going hard on it, brilliant start to the show. Crowd all seemed to be big fans, singing along with every song, which ruled (though there were a few really drunk guys near me yelling out Flood songs in a harsh accent and shouting over the Johns' banter with "you're not f**king funny haw haw haw" for the whole night but they got thrown out before Istanbul). All the Nanobots songs they played came out really well, sounded as if they had live versions of them totally down by now. On-stage banter was hilarious, with Flansburgh improvising a new song called "Hotel Detective Please" after it was shouted by the crowd and an impromptu discussion about the work of The Husband From Rosemary's Baby / John Cassavetes.

Personal highlights of the night were Istanbul (which had an almost endless yes, no, yes, no exchange between Flans and Linnell), Rhythm Section Want Ad, Memo to Human Resources, Can't Keep Johnny Down and Circular Karate Chop. At the end of the show Flans thanked everyone for coming, saying "We know you had your choice of ossified alternative rock bands tonight [the Pixies were playing at the same time in another venue on the night] but we'd like to thank you all for flying with us". Flans stuck around after to throw out some stickers at the end and it was really great to be up close and personal with someone who's music I'd followed for years, Marty hung around much longer, gave out his drumsticks and signed a heap of stuff. Loved the show and hope they come back again in 2015, failing that I'm definitely going to go to their next UK show!