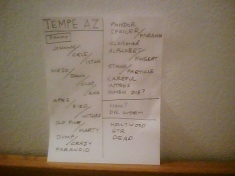 I wish I didn't keep up with what songs TMBG plays in other parts of the country. I was so disappointed that there were only two Lincoln songs and one of them was just ye olde Ana Ng. No one else seemed to mind, though, as the crowd elatedly devoured all the hits the band dished out, and another guy I know (a former employee of the venue) who hadn't been to a TMBG show before said it was among the most entertaining concerts he's ever seen. It was nice to see everyone else having such a great time. I was quite happy they played We Live in a Dump, but the crowd's lackluster response to it was a bummer; the Johns knew what they were doing by sticking to the well-known and the "hit-bound." (I was pleasantly surprised by how many people were singing along to How Can I Sing Like a Girl, though.)

Saw this show with my eldest son - he was the only one old enough to get in! My favorite part was when John Sid accidentally started the wrong verse in "Particle Man," admitted to it but kept playing, and then the band spent what seemed like several minutes debating how to rectify it. You gotta love the spontaneous, human, endearing situations like that.