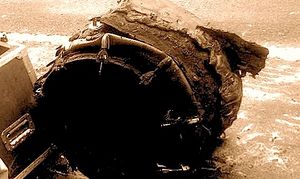 Lincoln-themed show with 15 out of 18 songs on the album performed. The band performed mostly with rented equipment after a trailer fire and truck breaking down. Flansy on "Everything Is Catching On Fire": "This first song is a long-distance dedication to all our equipment."

The Avatars Of They were originally going to perform "You'll Miss Me" from Lincoln at this show, but according to Flansburgh via Tumblr, this was canceled because of the trailer and truck mishaps: "You'll Miss Me couldn’t come together because, on top of the fire, the truck with all the burnt up gear and the Avatars broke down on the way to CT." This song, along with "The World's Address" and "I've Got A Match", ended up not being played at any Lincoln album shows in 2011-12.

This show included the first recorded live performance of "Stand On Your Own Head".

"Celebration" and the spoken bridge of "Snowball In Hell" were performed during soundcheck.

Amazing to see a Lincoln themed show! Got chills when John L sang the bridge for 'Crane,' and retro-chills when JUST the Johns came out to do 'Cage & Aquarium' and 'Kiss Me Son of God.' Highlight may have been 'Snowball' tho, they did a tweaked version of the coffee break bridge:

JF: when you ask me questions like that Paul, I always think to myself, why don’t you mind your own business? Paul. But to answer your question, AWWW, I guess I’m doing ok. I can’t complain. Why? Are you back on that old time-is-money kick?

3 Lincoln songs didn't make the cut - 'You'll Miss Me,' 'World's Address,' and 'I've Got Match.' One of the amps had the brandname "Matchless." Irony, or subliminal brilliance?

Also no Avatars :( Still clearing the smoke from their lungs I imagine...

It was a long week for They Might Be Giants – there was the trailer fire that destroyed a tremendous amount of their live equipment, there was the truck that broke down the day of this show that carried their remaining equipment, Dan Miller seemed sick, and The Avatars, despite surviving the fire, went and formed a Twitter account where they could air their loony political views without any restraint from John or John. Lesser bands would have collapsed under such a stressful situation, but They Might Be Giants soldiered on, straight into the Wolf’s Den to perform what seemed by all accounts to be an historic show.

The results of the stressful week seemed to be somewhat evident in the band’s set-up and performance. Most of the equipment onstage was rented, most notably the tenor sax (as one of the band members joked, “the golden clarinet”) used as a logical replacement for the bass clarinet. The between-song banter was minimal, and the Johns seemed a bit lost for words at times, understandably given the difficulties of the prior week. The Avatars failed to show up for their first show in who knows how long, and most surprisingly, John Flansburgh shaved his contentious beard, appearing clean-shaven for the first time in months.

But the key focus of the evening was the song selection, with TMBG eschewing the previous sets of this tour to perform a Lincoln-themed set. The thought of seeing the band play some of their best songs live, many of which have rarely or never been performed live, was something that made this show, more than just about any other, an absolute must-see.

In a show full of highlights, here are a few of them:

The band started the show off with “Everything Is Catching on Fire” as a clever little tribute to their lost equipment.
Due to being without a glockenspiel or bell, Danny Weinkauf substituted the notes on “Shoehorn With Teeth” with bass pinch harmonics.
The show featured maybe one of the heaviest “Ana Ng”s ever, kicked off having segued from “Cowtown” and dwelling on a violent rendering of the staccato intro for a while.
The band had to regain their composure after Flansburgh got off a bit in “Damn Good Times,” getting back on track, as always, with humor.
The first ever performance of “Stand on Your Own Head”, presumably.
The first performance of “Snowball In Hell” in about 21 years, complete with improvised bridge dialogue, where the Johns seemed to truly enjoy bantering off each other for a minute or so. Given how much fun they looked like they were having, I wouldn’t be terribly surprised if this ends up staying in the set; I sure hope it does.
On a related note, Flans’ lyric sheet for “Snowball” was sticking out of his coat pocket for the remainder of the performance.

Personally, I'm split on picking the show's absolute highlight. Seeing “They’ll Need A Crane” live was something of a revelation given that it’s become my favorite song by any artist. It makes perfect sense as part of their set and it’s thrilling to see that they’ve been playing it in their last few shows. The other unquestionable highlight of the evening was a John and John duet on “Cage and Aquarium” and “Kiss Me, Son of God”, both songs performed for the first time in 12 and 19 years, respectively. The former song’s ending was drawn out, diminishing in volume with each repeated phrase, while the latter song, another all time favorite of mine, brought on a communal sing-along 19 years in the making.

The band was in top form, made even more impressive by the week’s setbacks. Dan Miller, “the most self-medicated man in rock and roll”, was presumably ill and spent much of the show sitting down and reading music off a stand. Still, this didn’t hinder his performance, particularly on the “Damn Good Times” solo and the “Istanbul” intro. John Linnell seemed particularly animated throughout the evening, and Flansburgh was perhaps a little less energetic than usual, but given that he likely dealt with the week’s difficulties more than anyone else, this is easily forgivable.

As far as a free “fan appreciation show” can go, it’s difficult to imagine anything more rewarding to TMBG fans than finally hearing many of the songs we’ve been wanting to hear live for years. It’s a refreshing change from the usual set, and although I haven’t seen them nearly as often as most others here on the wiki, some of their most-performed songs still become a little tiresome even after seeing them a couple of times. While a constant, drastically rotating set-list is unrealistic and even downright rude to ask of TMBG, or any band for that matter (especially when TMBG do a good job of varying things as is), when a band has 700-odd songs to its name, most of which would fit perfectly in a live setting, it becomes more tempting to want to hear some of these lesser-performed songs live. This however was a show where exactly that happened, where “Particle Man” and “Mesopotamians” were switched out for “Piece of Dirt” and “Purple Toupee”, and where “Istanbul” was truncated to allot time for “Where Your Eyes Don’t Go”. It was that rare set and performance where I left feeling, well, appreciated. So this Thanksgiving, yes, I was thankful for TMBG giving me, despite many forces at work that could have kept the show from even happening, possibly the best show I’ve ever seen by any band.

Oh yeah, and that Mojo Chessmaster was sitting idly on stage the whole time. Hmm…