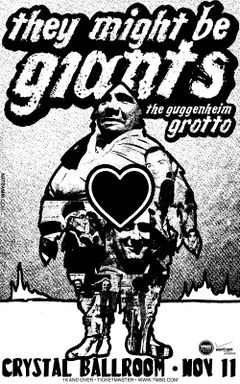 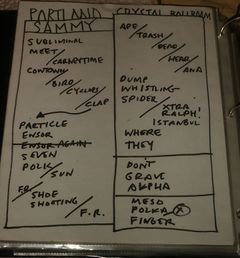 They Might Be Giants
— with The Guggenheim Grotto opening —
Crystal Ballroom in Portland, OR
November 11, 2009 at 9:00 PM

This was, without question, the best show I've been to. The setlist was fantastic, and I ended up right underneath Linnell.

The Guggenheim Grotto folks were fairly good and it didn't take very long for the audience to warm up to them. Afterwards it didn't take very long for TMBG to come out, they burst right into a rocking rendition of Subliminal. After Meet The Elements, Flansburgh told the audience that he wasn't very familiar with the history of the Crystal Ballroom, but that he doubted that the phrase "let's see some more clarinets" had been used very often, and with Linnell playing one of two clarinets they did Cowtown, which the crowd seemed to like a lot. The confetti cannon misfired during James K. Polk at an odd time and caught everybody by surprise. Everybody seemed to love Flansburgh's mention of their "radical new fact-based album." Hearing Aid was a surprise, but considering that they've been playing a lot of Flood shows I guess they figured why not. Whistling In The Dark was a lot of fun, and of course featured Flansburgh on the bass drum. Where Your Eyes Don't Go was good; the new arrangment isn't quite as fun in my opinion, but has far more energy. The crowd made an incredibly amount of noise before both encores, as they were helped by the floating floor of the Crystal. Everybody loved the encores, and really the entire show. A stellar setlist, combined with a very enthusiastic audience and a TMBG with much more energy than last time added up to a truly amazing show.

Phenomenal show! Easily the best setlist of any TMBG show I've been to (4 thus far). 'Subliminal' was a powerhouse opener from the oft neglected John Henry, and we got 'Don't Let's Start' to kick off the encore, which I read in an interview that they hardly ever play anymore! There was an abundance of older material which was a real treat, including a surprising total of 4 songs from Lincoln. The Avatar puppets were cooky and great (you never know what to expect from the giants), singing 'Shoehorn' with Marty's AMAZING bell solo, and 'Shooting Star.' The sole gent on horns and reeds had "some kind of musical instrument" (as Flans put it), which looked like a crosscut of some PVC pipe with some rubber tubing on top, and made for a stellar solo during 'Polk,' mimicking the saw sound quite well. The crowd was huge and loving every second of it - the bustling ballroom floor was bouncing all night!