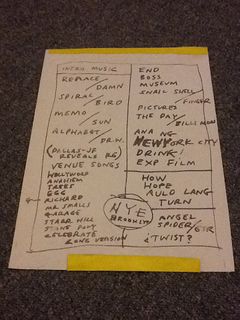 Crazy late start. I walked up to the club and 11:45 and the line was still going. We hit the stage @ 11:59 and Danny's pocket watch counts the New Year in. Let the show begin. We have a mixed history of NYE shows. The first year I was in the band we did two NYE shows at the old Tramps (NYC). This stands as one of my favorite shows ever. For some reason lots of people wore costumes, the band sounded incredible and the break between the shows was long enough for me to hit a friends party. Good times. Others, think Baltimore 2003, were joyless exercises in band perfunctory. Not us you understand, but playing in front of a crowd whose sole goal is to figure out a way to jump the line at the keg is not a dream date for me.
But, in keeping with the keeping of good times, I'm now adding this show to the latter list. The second show, free of monitoring snafus went off like the party you hear your friends talking about. Super crazy long, the tunes just keep coming and coming. This one is clocking in around 40 tracks. Robin G. does a phenomenal job of venue songs, complete with a newly tweaked libretto. The Johns are giving it their all as we play into the wee hours of the morning. If you were not satisfied with this show then... what gives brother!?
Smiles all round from Danny and Marty as the show glides along. The in-ear issue is resolved, it's getting later and later, the band is grooving, the crowd is digging it - what else do you want?
I've put up a nice sample of this one. I'm not so psyched about how we captured the low end. This one took a bit of getting together as the tape had some sonic issues check it out and see what you think. The show is fantastic, super long, with one of the best set lists we've ever done. The Johns, Danny, Marty, myself and the crowd are in the party mood and the energy throughout this show is great.
Hope everyone there had as good time as us.

Fun show for sure that featured several Flansisms including "Estrogen, Estrogen and Estrogen" during The Sun, and "Optimus Prime" during Fingertips.
Goldie was great. The new intros to the venue songs were really funny. I've only seen Sarah Vowell do this before and its a tough call to say which was better. Their deliveries are quite different but equally enjoyable.
Highlights for me included Pictures of Pandas Painting, Ana, Snail Shell, New York City (this was the first TMBG show with my wife + her first TMBG show + we live in Manhattan) and the slice of pizza we got at the pizza joint near the L Train. Real NYC pizza is in Brooklyn people.
Flans didn't quite have his act together in the beginning (guitar issues I think) and goofed about it a little on stage (similar to Trey Anastasio's Jedi guitar thing).
The show itself started at about 11:59:57 though the John's were messing up the countdown on purpose:

(numbers are guesses)...this led into Auld Lang Syne. Lyrics were handed out at the door (foam fingers/hands were given out at the Merch. table). I'd no idea how bizarre the lyrics were. Johns tried to explain/define some of the lyrics before they started playing.
Great show.

It's nice to hear TMBG up close--and we were right up front, so we got to hear them VERY up close--but that was really too tiny a venue, especially given how many people were at the show.
I also wasn't very impressed with the crowd. This was my first TMBG show in New York after three years in California, where the fans are a) pathetically dedicated because they're all transplanted New Yorkers and desperate for anything that reminds them of home and b) super nice because California has rubbed off on them. The fans at Northsix were less friendly, less polite, and considerably more drunk, and not a single one of them was wearing a "Friends don't let friends play 'Lady of Spain'" anti-accordion t-shirt. Very sad.
Technical problems abounded, including Linnell breaking a key on his accordion and having to play Particle Man on the keyboard instead, but it was still a damn fine show.