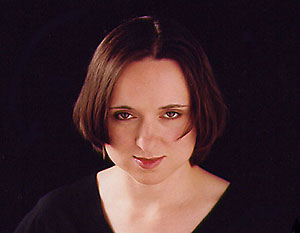 Sarah Vowell is a writer, a humorist, a staple of Public Radio International's This American Life (which has featured TMBG on many occasions), and an avid fan of They Might Be Giants (and Abe Lincoln). Beyond PRI, Sarah was featured extensively in the TMBG documentary Gigantic, and was one of the four participants (along with John Flansburgh, John Linnell, and AJ Schnack) in the movie's DVD commentary track. She also wrote most of the liner notes for Dial-A-Song: 20 Years Of They Might Be Giants, and wrote The Partly Cloudy Patriot for which TMBG contributed a vast amount of music. Additionally, she has contributed her voice for the shy teenage superhero Violet in the 2004 Pixar film The Incredibles and its 2018 sequel, and wrote and released a non-fiction work, Assassination Vacation. Her bibliography includes works on topics as varied as presidential assassinations, Bostonian Puritans, and manifest destiny.