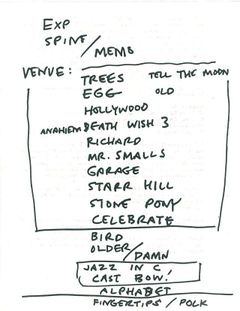 They Might Be Giants
— with McSweeney's opening —
Lincoln Center in New York, NY
March 2, 2005

Quite an elegant venue, The Allen Room. The show opened with John Hodgman hosting. He introduced the speakers and narrated the Venue Songs set. David Rakoff spoke of his experiences at a new-age monastery. Robin Goldwasser and David Driver performed during this piece, "Tonight You Belong To Me" (Billy Rose & Lee David). Rakoff was followed by Ben Karlin, who read some excerpts from his journal during the elections of 2004. He was joined by Stephen Colbert and they read from America, the Book. Sarah Vowell concluded with her history on the evolution of "The Battle Hymn of the Republic". TMBG performed different renditions of the tune, including "John Brown's Body" and the IWW union song.

Immediately afterward, TMBG broke into their set which started with the venue songs. John Hodgman narrated from a script which was also used for the other performance of venue songs at House of Blues-Sunset Strip on 3/24/05.