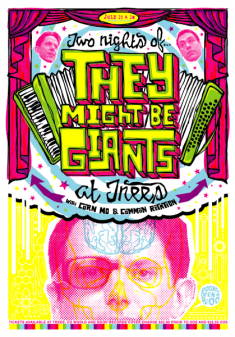 Did I mention that whole tour has been held in a boiling teapot? The heat has been brutal and Trees was the first placed we played that had decent air conditioning. Corn Mo joins the band on Particle man (he's from Denton, TX) and the crowd digs it. This gig has that great club feel and we tried to make the tape reflect that - a little more audience in the mix so the vibe would come through. Definitely the best looking set list of the tour - check the PDF to see Flans' fine illustrations.