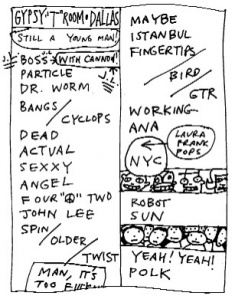 This was my third They Might Be Giants concert at the Gypsy Tea Room. The show was at 9 PM and doors didn't open until 8:30ish, so this was a very late show. In typical Gypsy Tea Room fasion there were excruciatingly long waits between the doors opening / opening act / main act, but at least this time the air conditioner was working well.

My brother and I got to Deep Ellum way too early. After bumming around a while and checking out some CD stores, we got in line for the concert about 7PM when there were only a dozen or so people. By the time the doors opened, the line appeared to be at least a block long, probably more. We managed to snag some sweet spots right in front of the stage. By the time the first act came on, we had been waiting for well over two hours and we were very ready to hear some music. There had been some confusion about who would be opening (TMBG, Star Tickets, and the venue all had different bands on their sites) but it turned out to be Muckafurgason.

This was the first time I had heard Muckafurgason and they were quite enjoyable. At first I thought they were going to be a typical boring college band but they proved me wrong with their first song, "You ain't a man until you've had a man". All of their songs were of a humorous nature but they didn't present themselves as a gimmick band so it was quite enjoyable. All three members of the band play guitar, bass, and drums, and between each song they would swap instruments. My favorite was their final song, "MC Speller", which had beat boxing and break dancing. Certainly not what I was expecting from a trio of nerdy white guys.

After Muckafurgason there was a considerable wait before They Might Be Giants. The bad part about being right in front of the stage is there are hundreds of people squished behind you and you can't go anywhere, so my brother and I had to stand there and wait the whole time. I think some of the people behind me were upset that a tall person was blocking their view of Flansburgh. Oh well.

When They Might Be Giants finally took the stage, it was slightly disappointing in comparison to previous shows. Rather than build up the audience as in previous shows, they jumped immediately into some of their most energetic songs. This probably wasn't entirely their fault as they didn't have as much time to work with. They didn't take the stage until after 10PM, and only played one long set with no intermission. They seemed pretty disoriented at first (especially Linnell). Apparently Linnell got confused during Particle Man and had to stop, and after some discussion they decided to continue with the song rather than move along. By the time they got to SEXXY things were clicking and the rest of the show went pretty smoothly. They did the "dial-a-drum-solo" bit with Dan Hickey again, but it wasn't nearly as amusing as last time. They also did the "spin-the-dial" bit which I had never seen before and it was quite enjoyable. Flansburgh did a screaming nu-metal style routine which he repeated later in the show. Overall the show didn't quite meet expectations set by previous shows, but it was still really good.