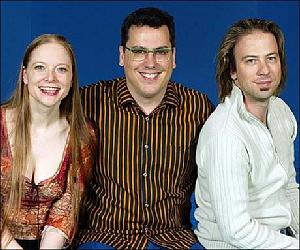 David Driver starred as Xanthus in the musical People Are Wrong!, produced by John Flansburgh. He can be heard performing the role on the promotional soundtrack. He is a regular guest of the Loser's Lounge and often performs with Robin Goldwasser. He has appeared on stage with They Might Be Giants at shows on May 22, 2003 and October 25, 2008 singing "Mink Car" with the band. In addition, his Driver Quartet opened for TMBG at Le Poisson Rouge on November 29, 2008. He was also an understudy in the original Broadway cast of Rent.

In the mid '90s, Driver was one third of the band Meow with Marty Beller and Mike Stanzilis. The band released one album, Goalie for the Other Team on Enemy Records. Driver and Beller have continued to collaborate on a variety of projects over the years, including original music for a production of Romeo and Juliet at the Lucille Lortel Theater in 2001. Selections from the play as well as several tracks from Goalie for the Other Team were available for a time on Marty's website. The album can currently be found on streaming sites like Spotify.

Driver is also a graphic and industrial designer. He has created a number of short videos for clients, many of which feature music by Marty Beller and animation by frequent TMBG collaborator, Divya Srinivasan. Also featured is a "micro-opera" called Sometimes The Dream Is Real, which he wrote with fellow People Are Wrong! cast member, Chris Anderson.

Driver was a guest vocalist on the song "Three Might Be Duende" from TMBG's fifteenth studio album, Join Us.