America Runs on Dunkin' was an ad campaign for Dunkin' Donuts created by marketing agency Hill Holliday, which featured dozens of commercials with new original short songs by They Might Be Giants between 2006 and 2008.

Through the mid-00s TMBG recorded a couple dozen songs for television and radio commercials for Dunkin Donuts. It was an impossibly open-ended assignment and easily the most fun we’ve ever had working for television folks. The creative team there would often just give us small sets of words to work off of, and "Karate!" might be the most extreme example—and yet it turned into something far more universal than one might imagine.

Two songs that were originally used for the campaign as commercials, "Tree" and "Got Getting Up So Down", later had extended versions featured on the They Might Be Giants albums Why? and Phone Power in 2015 and 2016, respectively. The song "Eight Hundred And Thirteen Mile Car Trip" from Here Come The 123s was cowritten by Hill Holliday's Tim Cawley, implying it may have originally been a song written for this campaign.

Among the dozens of songs They Might Be Giants recorded for the ad campaign, some went unused and remained unheard until years later.

Though not always explicitly stated, many songs likely originally recorded for the campaign were released in the They Might Be Giants Podcast. They can be identified by being commercial length (usually 0:30) with space for a voice-over at the end, and feature lyrics discussing topics like food, coffee, waking up, commuting and working. 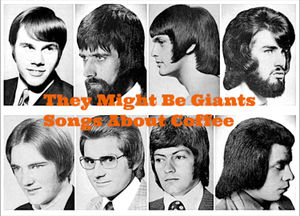 On November 15, 2020, They Might Be Giants released an 18-minute YouTube video called "Songs About Coffee" featuring 28 Dunkin' Donuts jingles, including aired, unused and alternate versions. The description of the video refers to Tim Cawley, a creative director and copywriter at ad agency Hill Holliday who helped create the commercials:

An 18 minute diversion for these times. All praise to Tim C. and the players who made each song special.

Some of these songs could have aired or been released under alternate titles, or may still remain unheard.