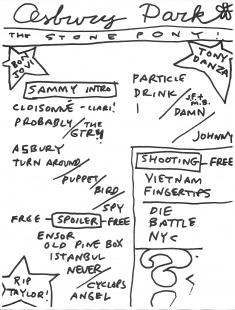 This show was my second at the Stone Pony and thirteenth overall. It was amazing even before the show started! Flansy came out to see everyone already in line and personally passed out Join Us decals to everyone! It so nice to see how great Flansy is to his fans!
Jonathan Coulton was amazing! I was so excited to see him and he played "Still Alive", "Skullcrusher Mountain", and "The Future Soon" among others. He played two new songs as well! During "Mr. Fancy Pants" he put down his guitar and used a zendrum. He hit the wrong button at one point, but laughed about it with the audience. During "re: Your Brains" he had the audience sing the chorus with him, but commented that we sung too well and that we were suppose to be zombies.
They Might Be Giants were terrific (as usual!). They started with "Cloisonné" and "You Probably Get That A Lot". Then, They launched into "The Guitar". What was great about "The Guitar" is that everyone sang along and I could barely hear Flansy singing.
Audience participation was at its max during "Spy" in which Linnell conducted the audience and the band for when they needed to play or yell out. "The Battle for the Planet of the Apes" divided the audience into people (the women and the band) and the apes (the men, Linnell and Flansy). People won!
The Avatars of They made a double appearance, first singing "Spoiler Alert" during the set, then came back during the first encore to sing "What is a Shooting Star?". The Avatars now have names, however they have a striking similarity to other famous names.
The band flubbed a few songs. During "Cyclops Rock", Flansy missed his cue, stating he was "thinking about Chris Christie's medical records". That came from the audience asking if they took a helicopter to the show and then I yelled out "At least you're not Chris Christie!", so sorry Flans! The band played it off though and we got to hear some very witty banter from the band. One odd thing was that the confetti canons were set up and the band mentioned them, but they were never set off. Maybe the Stone Pony didn't want to clean it up, I don't know.
When the show was done, several groups of people were waiting for the band, but were chased off by a bouncer saying "the band went out a back door". I decided to wait, however, and got my setlist signed by Danny Weinkauf and another fan got his apron signed. About 20 minutes later, Flansy and JoCo walked out the door. Flansy gave me a hug, he and JoCo signed my setlist and then took a picture with me. The perfect end to a perfect night!

So this one time, John Flansburgh himself gave a free Join Us decal to everyone waiting in line. Such a nice guy!
This was a setlist full of rarities and Join Us songs!
I mean, they OPENED with Cloisonne (probably the best song off of Join Us), though Marty's SPD-S wasn't even working for the song, Turn Around, Spy, Puppet Head (I've been waiting three years to hear that song live!), Meet James Ensor, Cyclops Rock, She's An Angel, and lastly, Battle for the Planet of the Apes! They haven't done that since 2003!!
I was standing RIGHT in front of Marty's drumset. I could've touched his bass drum if I wanted. He had to bend down and look under his ride cymbal to wave to me. My left ear is still ringing from all the bass drum kicks. Like I was getting the bass drum itself, plus the bass drum in the soundboard, so I'm surprised I'm not deaf yet. And I'm a drummer, my tolerance for these things is usually pretty high!
While I was expecting to hear more of the classics, like Ana Ng, Doctor Worm, Why Does The Sun Shine?, I feel opening with Cloisonne, and playing The Guitar/Birdhouse/Puppet Head/Angel really made up for it all. :D
This'll probably be the last time I see TMBG for a while. And I have to say, I'm pretty happy to have seen this show. I love this band to death. <3