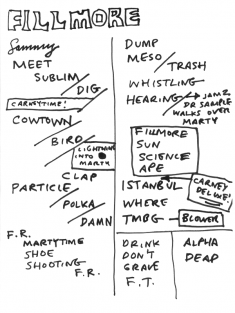 They Might Be Giants
— with The Guggenheim Grotto opening —
The Fillmore in San Francisco, CA
November 13, 2009 at 9:00 PM

Out of the three i've seen, this was the best TMBG concert. My second time at the Filmore, my first was Willie Nelson, i can say this is a great setting for TMBG... it's a place in music history. Anyways... the concert was great, but before the show i kind of alarmed people in my vicinity by yelling "he's got a gun!" ... i was only talking about the (stupid) new "Red Hulk," of marvel comics, but i don't think people heard that part. The Guggenhiem Grotto BORED ME TO TEARS. my wife loved them because they were irish guys. after they got off the stage, it was a short wait, and one Baby Huey song, until the guys graced the stage. even though they were visibly tired, the show was wonderful, and the puppets seemed to open Linnell up a bit to the crowd. I laughed as Flans held out his guitar for people to touch and someone actually tried to take it from him. Welcome to San Francisco, guys! During a momentary lull in stage activity, my wife shouted "ACCORDIANS ARE SEXY" at Linnell. The iPhone bit was great, and i have to agree with Flans when he said "I have a feeling that techno music is about to get a whole lot worse." hearing stuff off of Lincoln live made me happy. and the Saxomaphonist was insane! I don't know what the hell kind of instrument he was playing at the end before the encores, but it was unbelievable! on the whole, the show was awesome, although there was far less weed being consumed at this show than the Willie Nelson show, and i had to wonder about the guy outside that was asking for change or a poster. i mean, what are you going to do with a poster when everyone is coming out of the building with one? whatever. a few days later i heard someone on some SF website gave the concert a bad review saying they were "Sub-par" and below acceptable energy. this person simply doesn't understand that TMBG is the most hard working band in the industry and THAT's the reason they came out to play for YOU, even though i'm sure they'd like to be relaxing with their friends and families.

DominEl: Flansburgh says this is his favorite show ever (I don't know if he says that every show now), but it was probably the best concert I've ever seen by anybody. I feel lucky to have heard "Don't Let's Start" and "Where Your Eyes Don't Go" in concert! I can die happy now. "Why Does The Sun Shine?" was played with Marty Beller's new electronic drumset, loaded with funny samples, and Linnell/Miller used droning electronic sounds for the talking parts (Dan Miller also somehow worked in his iPhone to make some noises). It was really cool to see Linnell play clarinet on "Cowtown," too!

OhsnapitsKat: I've only seen TMBG once before this show, but I have to say that this concert was the most amazing thing I've ever been a part of. Hearing some of my favorites, like "Don't Let's Start" and "Whistling In The Dark" really made my night, and seeing Marty Beller's excellent performance in "Shoehorn With Teeth" with three desk bells on a block of wood is something I'll probably never forget. It was an all around great show, and I can't wait till they're out in SF again.

It was a really awesome, high energy show. (despite the curious ending of 'Dead') I really hope they don't wait two years again to return to the Bay Area.