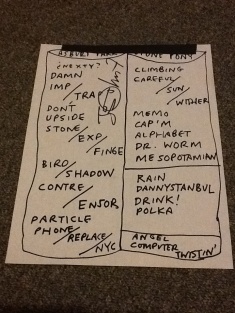 A nice, long set. They performed a piece called "Conversations With Dead People" in which Flansy ran off stage and Linnell used "necrotechnology" to talk to "Eleanor Roosevelt" who, for some reason, kept asking to talk to Rush. They did a rare double encore, and played "The Famous Polka," which was very unexpected. Despite some jerk yelling "PLAY SPIDER!!!" at the end of every song (and during some others), they never played Spider. The opening song was "Damn Good Times," but that's about the only part of the setlist I can remember. The opening act was some drunk/high/crazy DJ who played records for WAAAAAAY too long and thought he was so great because he made ANOTHER remix of sexyback (stop the bloody presses). Luckily, he nearly got booed off the stage, which was enjoyable. They played quite a few songs from The Else, and I have to say, that album's gonna be awesome. I had 2nd row standing room, right in the middle. It was a great two hours. They put on one heck of a show.