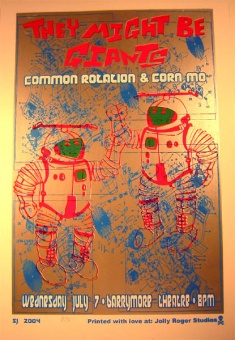 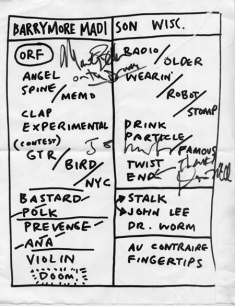 Songs that were played that weren't on the setlist:

The audio quality of this show is mixed. For the most part, it's pretty good. It sounds very much like a live show, with a good balance between the music and the audience. The instruments are well-mixed and not too clinical. On the other hand, there is tons of clipping and some distortion. This seems to plague all of the recordings I have from the early part of their tour (Dallas, San Fran, Leeds). The bass often clips when played too hard and distorts pretty bad on a few occasions. Also, the drums clip anytime a cymbal is hit hard. It doesn't get too bad until the encore, when "John Lee Supertaster" is rendered completely unlistenable by constant clipping of the drums. Clipping occurs when a channel is overloaded by an instrument during recording, and it sounds like the name implies. It's a total shame because without the clipping, the audio quality of this show would be great.

The setlist is pretty standard fare for the most part. "Stompbox" makes a rare appearance and this version of "Spin the Dial" is great. "Angel" as the opener is stupendous. The real reason for buying this show would be the band's energy during the show. As written by Dan Miller, the band had a great time at this venue and it really shows in the recording. They are together and in great form and are obviously having fun.

To sum it all up, this is a great show plagued mercilessly by audio clipping and distortion.

So I'm sitting here in the hotel room writing these reviews and I pose the Madison question to MB - his immediate response was "what a great show." - I think I'll leave it at that. We love Madison; the whole hippy 2004 thing really works with us. After an undeserved day off in town we were itching for a show - and got as good as we gave. Thanks Madison - a high point of every tour.