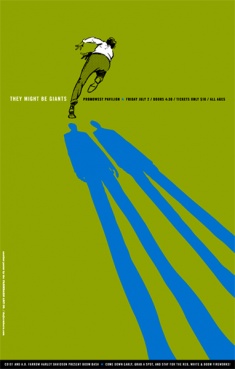 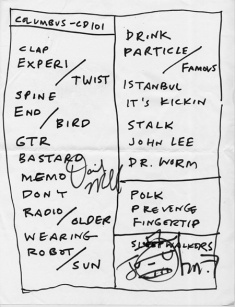 They Might Be Giants
— with The Reaganomics, Shanahan School of Irish Dance, Corn Mo opening —
Promowest Pavilion in Columbus, OH
July 2, 2004 at 4:30 PM

First show of the tour full of nervous energy and a great crowd. We were battling against the fireworks being fired off throughout the show. If you listen carefully you can hear the banging in the background, especially between songs. Lots of good solid versions of older songs and some spirited versions of the new ones. I'm really looking forward to hearing the new songs get better as the tour goes on. We kind of screwed up "the Spine" the first time through, so Flans had us play it again.

This is the first show we recorded, so Brian (FOH) was giving me hand signal updates throughout the show to let me know the tape was working.

My brother crowd surfed at the outdoor show in Columbus, Ohio 7/2/2004 preceding fireworks during "Don't Let's Start." Flans briefly stopped the song and said, "Put that man down! He’s done nothing wrong!" Then Linnell replied, "If he makes it to the stage we will tear him limb from limb." That was the last time anyone I was with did it at a TMBG show.[1]