From This Might Be A Wiki
< Shows
3 wikians attended: Ames Lange17 TheCerealPoet 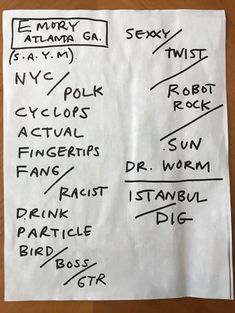 They Might Be Giants
Emory University in Atlanta, GA
April 25, 2001

Review by Scott Lange:
This was an outdoor, afternoon concert, held on a field in the middle of the Emory campus.

This was my first TMBG concert and one of the best I've been to. I drove in from Athens with a girl I was seeing, Tracey, and we took her older brother, Scott (who posted above... Hello, Scott.), over to the Emory Campus. The show was free for Emory students, but it was only for students. I was a tad concerned that we didn't have any sort of plan to get in and that we might have driven over in vain; however, Tracey's very pretty, and she managed to get us in almost immediately. The venue was a large field, and there were free cotton-candy and beer stations. Reel Big Fish opened mid-afternoon, but the best part of that was knowing that the Giants were on their way. The crowd was relatively small, since it was only open to Emory kids, but TMBG still brought their A game and gave a great show. They are one of the few bands I've heard who sound as good live as they do on their CDs. The music was clean, and as always, they changed things up just a little to add some novelty. At one point Flansburgh called on the people who where at the outskirts of the field to come closer and have some fun. They didn't budge, and he made some quip about frat boys thinking they're too cool, which got a good laugh from the crowd. I believe that happened just before they played "The Guitar (The Lion Sleeps Tonight)." It stands out, as that is the only time I've heard them play that song in concert. Anyhoo, it was a great show, and Flansburgh stuck around afterward to sign stuff.