On March 17, 2007, it was revealed via a TMBG Myspace bulletin that Marcel Dzama would be creating the artwork for the band's next rock album, The Else, along with a collection of photos to be included in the album's deluxe CD package. On March 27, 2007, the first image was posted to the band's Myspace, entitled "The Else rehearsals." Over the next few weeks, more and more images were posted to the Myspace or revealed through the band's newsletters.

The photos were taken on a very cold day in the Catskill Mountains during the winter of 2006, after a snowstorm the evening before. According to an interview, the models in the photographs are Robin Goldwasser and John and John's friends Dave and Jason. 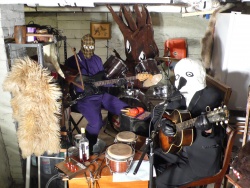 Other items of interest in the image include a Campari wine bottle, Pippin songbook, and TMBG logo sticker.

The Else advance copy inlay[edit] 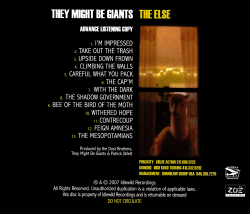 Album inlay for review copies of The Else

Advanced copies of The Else were first sent to reviewers on the week of May 5, 2007. Other than a design on the disc itself, the only accompanying artwork with the advance CD was a back inlay, containing the track listing and a picture of an eerie alpaca (later featured in the "Table of Masks" image). 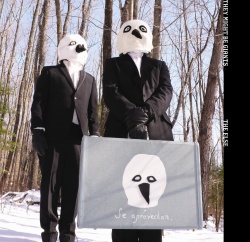 Album cover for The Else

TMBG's twelfth album was released on Tuesday, May 15 to the US iTunes Store. While the cover art had been discovered earlier on theymightbegiants.com's file directories (where it was uploaded in a miniature resolution on April 7), the artwork was not officially unveiled until the album's digital release, when it appeared on iTunes.

According to an interview with John Flansburgh:

The fact that the snowmen are in black and white just reminds me of the jump, [how] he (Marcel) made costumes of drawings of snowmen. He's creating 3D versions of the things that he draws. Typically a snowman's nose is a carrot and carrots are orange, but they're not orange in his drawings because he has a very restricted palette 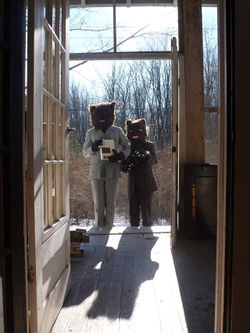 This image contains the second appearance of these bears, the first being the mask of the little bear in the bottom-right corner of "The Else rehearsals". This image was first spotted cropped and small in early May on IGN.com, but the full-size image was not seen until the newsletter. 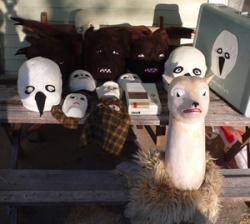 Featured in this image are the two snowmen heads from The Else's cover, the "Se aprovechan" suitcase from the cover, the alpaca from the album's advance copy inlay, the bassist's mask from "The Else rehearsals", two (or three) bears and the cassette recorder from "Bears at Door", and, making first appearances here: a skull (or just a sinister face) in the background, and four theatre masks. 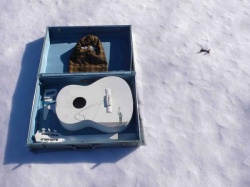 This image was use for the I'm Impressed promo single. 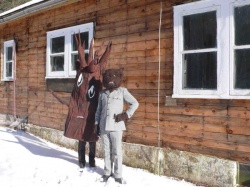 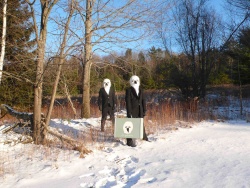