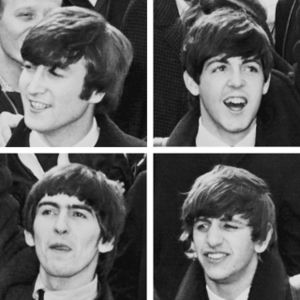 The Beatles were a popular and influential rock band formed in Liverpool in the 1960s. The band consisted of Paul McCartney, John Lennon, George Harrison, and Ringo Starr.

Like most children of the decade, John Linnell and John Flansburgh grew up listening to The Beatles, who were therefore among their first exposures to pop music. John Flansburgh recalls that the first album he purchased, when he was just 5 years old, was A Hard Day's Night.[1]

In Gigantic, Linnell refers to They Might Be Giants themselves as "The Shitty Beatles". At live TMBG shows, the band has been known to execute a synchronized bow at the close of a song, particularly "James K. Polk." Flansburgh has referred to this as the "Beatle Bow."