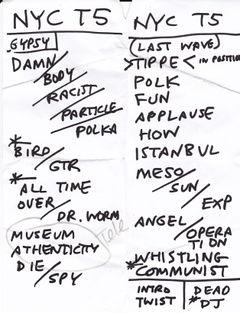 Flansburgh during Band Intros:
"Thank the fellow with the IFC shirt, you’ve got some big ideas, but this is not the time or place."
Linnell mocked my claw movements during the last verse of James K. Polk.
Overall, great show! I even managed to get a signed drumhead from Marty Beller!

Top-form banter at this show. There was much discussion of taxidermying one's friends, and whether this would necessarily involve cannibalism.
It was hard to work up a full head of steam after the awful news from Pittsburgh. People sang along very loudly to "Your Racist Friend" and seemed to appreciate "The Communists Have the Music"; there was less enthusiasm for "When Will You Die" as images of guns flashed on the screen behind the band.
I've never seen a crowd so apathetic to "Birdhouse", which usually has that "all rise for the national anthem" feel. I think the band actually wrapped it up a chorus early because people weren't super into it. But they pulled out all the stops and got us moving with other bouncy songs, especially "Doctor Worm" and "The Mesopotamians". In addition to the usual crowdpleasers, it was great to hear "Experimental Film" and "How Can I Sing like a Girl?" for the first time in a while.
Curt Ramm was ON FIRE—the best performance I've seen from him, I think. He gave a really legendary intro to "Istanbul", alternating trombone and trumpet.
I felt personally called out by the intro to "All Time What" and "Let's Get This Over With" that apologized to people who'd been dragged to the show by their friends. The friends I dragged to the show assured me that they liked those songs just fine. (It's possible that they were just being nice.)
I'm glad Linnell likes his contra-alto clarinet so much, but I'm a little sad that its appearance onstage no longer promises a performance of "Cloisonné".
Terminal 5 is a good venue for TMBG, with a little more capacity than Music Hall of Williamsburg and some nice amenities. I hope they play there again.

I realize I'm about four years late to the party here, but just wanted to chime in cuz I'm the maniac who brought my own set list to the show, which JL noticed and JF promtly confiscated from me. I did it as a goof and had posted it (either on Misc T, their Tumblr or BOTH) a few weeks prior to the show. I wish I had the foresight to include Sleepwalkers (played the following night) on my list, but sadly, I didn't. Anyway, I thought it might be good to document the fact that yes, one crazed fan did bring his own setlist to a TMBG show, and here it is: https://www.flickr.com/photos/152325152@N04/52345538473/