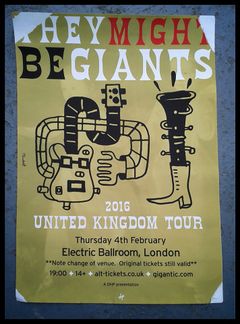 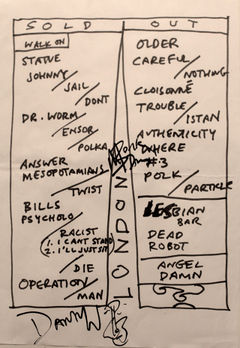 On the setlist but wasn't performed:

Dr Raygun: We woke up late and then slouched around the hotel room drinking tea and discussing the previous night’s thrilling experience. Finally I was required to start adulting and Fortify! So winkled us out of bed and into the car for the drive back to London. Safely navigating Cambridge’s notorious one-way system I put my DAS compilation on the stereo and we headed south. We dropped the car off and checked in at the hotel (where I had a non-refundable room booked for months and months in advance) in order to dump bags in the room. Having heard that there had been issues at other venues we were slightly concerned about getting to the Electric Ballroom nice and early in order to diffuse any potential problems with the redemption of our IFC tickets so off we headed to Camden.

While struggling to operate the automatic ticket machine at Shepherds’ Bush tube station the guy using the adjacent machine turned to me and said “Excuse me, were you at the gig last night?” Expecting to see a fellow audience member I looked up to see a familiar face — Dan Miller! A short chat and friendly hand-shake later he departed for the train and I returned to negotiating the infernal ticket-issuing engine.

On arriving at the Electric Ballroom we discovered we weren’t first in the queue but that my chum David had been there since 1pm. He agreed to hold our places so we headed off to the pub for food and London Pride which was a relief after the dreadful pint of wee-wee I had drunk the previous night at the Cambridge Junction. On returning to the queue we were quickly joined by Rachel from Wales, some lads from Germany and a group of highly inebriated street drinkers who alternately tried to sell us dope and pages from a comic sticker book. When one of them finally collapsed into a bin and then the venue’s crash barriers, 999 calls were put out and the police and ambulance notified.

Around 6:30 we were relieved to find that that the management were giving special priority to IFC ticket holders and we were allowed in first giving us the chance to grab the very best position: mid-right front row, slap-bang in front of where we anticipated Flans would be standing, with (hopefully) Linnell’s keyboard to our left. The keyboard was pushed right back next to Marty’s riser and Rachel raised a further concern that when they adjusted everything after the ‘acoustic opener’ and on such a small stage they might place it right in front of us blocking our view of everything except Linnell’s feet. Jill disagreed with us and reminds me that at no point did she believe the keyboard was going to be placed in front of us but no one listened. Once ensconced, I wriggled out for a quick loo stop and to buy drinks for our crowd; on the way back I spotted a lone tour poster and was able to persuade a very sweet security dude to let me rip it down.

The opener, Jake Morley, (who we had chatted to on entering the venue not realizing who he was) was fab, entertaining and funny with a short selection of songs which were warmly received by the packed house. His pick-up slipped slightly which David noticed and offered him the use of his leatherman to tighten the screws, which was nice. After Jake’s allotted twenty minutes were up the gear was reorganized and the keyboard positioned exactly as Jill had anticipated.

In a sea of light and a whirl of noise TMBG swept on the stage to an ecstatic reception and launched straight into The Statue Got Me High, which for me is an all time favourite. The set list was perfect; Flans was animated and the whole band looked like they were really enjoying themselves. High points for me included Mesopotamians, Nothings Gonna Change My Clothes, Where Your Eyes Don’t Go and When Will You Die — none of which they did the previous night — and it was wonderful to hear Trouble Awful Devil Evil again with better sound quality (overall the sound was way better than Cambridge). There was a better balance of banter and music, although we heard again about the bands plans for a TMBG/Destiny’s Child resort hotel and Older was interrupted this time by a phone call from the Ghost of the Shepherds’ Bush Empire’s Roof. Flans imparted yet more obscure information about the clarinet, revealing that Linnell’s superior ones are not only solid but solid chocolate, the bass being milk and the Bb, dark. Linnell said he had to restrain himself from eating them as he plays.

Flans made some comments about the variability of the experiences that had had on this tour and I turned to Jill saying “Last night, huh!” and Danny spotted me and gave me an acknowledging nod. I also had a totally legit Linnell smile when Flans was complaining about his terrible set list organization. He had put one of their biggest songs (Istanbul) right before one of the more obscure numbers (Authenticity Trip) and was saying that Album Raises (on which the latter song appears) was one of their lesser albums. I was agreeing with my chums in the front row that it is an INCREDIBLE album and Linnell looked right down at me and gave me an enormous smile — so even if he can't actually *see* the front row he can certainly hear them and appreciate their supportive comments. The main set was rounded off by a totally hot version of Particle Man, with Linnell breaking into Michael Row The Boat Ashore in the middle.

We screamed ourselves hoarse and stamped our feet until they obliged us with two more encores, the last song of which Rachel and I harmonized enthusiastically with Linnell’s vocal line in Damn Good Times. It only occurred to me after that that they hadn’t played Birdhouse and knowing that they wouldn’t leave without playing their only top ten hit single to the people who gave it to them, I was satisfied that they would be back to oblige—which they duly were. This final song was lifted the entire audience to the point of ecstatic rapture as we pogoed, danced and cried out the lyrics with abandon.

After the show David was given a set list which he gave to me and which I in turn gave to Jill as I had previously promised. Danny and Marty quickly returned with stickers to hand out; the crowd rushed forward and pinned us to the bar so we waited patiently while Danny tossed stickers which rained down on our heads. I got a bunch from Flans as I wanted to be able to send them to other folk who didn’t get them at the other tour dates. Really not wanting it all to be over we finally tore ourselves away and made our way back feeling that we had been transformed into better people by the experience.

This was probably the best TMBG gig I have been to (although I can’t remember enough about the early 90s ones I went to; IIRC The T+C was pretty great too) as the band were totally tight with an incredibly good set list, a perfect balance of banter and songs, no avatars and the entire crowd were all so much in love with them again. The biggest joy was that that the band all looked so happy and blissful in their performances and I don’t think I have ever seen Linnell look so happy and animated while Flans was jumping around like a teenager. Thank you, TMBG for making the world a better place in which to live. Thank you.

Vnclan: My twin sister and I decided on getting tickets for this show after hearing a few songs and watching a few videos online, seeing that they put on a good performance. We got to the Electric Ballroom early enough to meet Steve and his group of drunk friends trying to sell us stickers and start a conversation. He was nice enough, buying my sister cigarettes and letting us sit on his cardboard, until he had finished his bottle of Smirnoff and started falling over into the road across from us (that was when my sister and I called 999 after our attempts to get rid of him failed). As well as Drunk Steve, we met some other really nice people outside the venue a few hours before the queue even started. Once we got into the venue I was in the front row, which was nice as I'm unable to stand up for long due to the problems with my knees and I had a great view of the stage! Although Jake Morley was an absolutely fantastic choice of support, I was thankful that his set was short (I'm used to waiting 2 hours for the main act to come on). The band came on stage after only a few minutes and even though I only knew about five of their songs I really enjoyed it! They had great stage banter, the phone call during the Destiny's Child cover song about the Ghost of The Shepherd's Bush Empire Roof had me laughing out loud, even on the train home. I was yawning throughout the whole set because I had just come from school but their music managed to really pump me up and get me to sing along. When they played Birdhouse in Your Soul during the final encore, I sang as loud as possible and couldn't stop smiling! Even though I felt like I was a little too young to be there I still enjoyed it and felt welcomed by long time fans.

I stayed for a while after their set had finished and got some stickers from the band, which are now plastered over every surface I could find. After buying myself a hoodie, I had a chat and took a picture with the lovely Jake Morley, who was so so so friendly and absolutely charming. I really loved the whole experience and as soon as I came home listened to as many songs as I could remember, even though I could barely keep my eyes open at school the next day. I think I can definitely say that seeing this band has improved my life and made a good memory that I'm sure will stick with me. I'm definitely going to the next one! They Might Be Giants definitely have another fan.