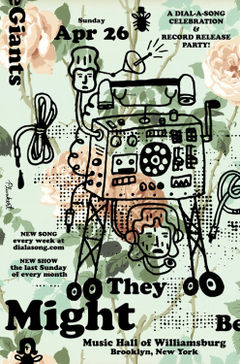 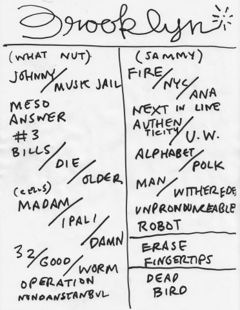 THIS SHOW. THIS SHOW WAS AMAZING. JUST LOOK AT THAT SETLIST. IT IS THE SETLIST EQUIVALENT OF THE ALL-STAR TEAM. The only way it could have possibly made me happier would be if it included "She's an Angel" and "S-E-X-X-Y", but I realize one cannot literally have everything, and I still danced my feet off and screamed myself hoarse.

JF awkwardly flubbed a few lines on "Let Me Tell You About My Operation"--which, let's face it, is reduced from brilliance to mere greatness in the absence of the horn section--and missed the start of the bridge on "32 Footsteps", but whatever. They played "Withered Hope"! (If you heard a window-shattering shriek of delight from the audience during the opening riff, that was me.) They played "New York City"! (If you saw someone with actual tears running down their face at the end of that song, that was me.) For this I will forgive many, many flubs. For this I will even forgive the kind of embarrassingly terrible "Mama TMBG/Papa TMBG" interstitial skits, though I sure hope those are short-lived. Let's make fun of older people and people in prison, ha ha ha. Ha. sigh

JL was in top form--sometimes he manages to be sort of self-effacing despite being at the front and center of the stage, but this time he was totally hamming it up and clearly having a great time. Watching him speak static at the end of "Unpronounceable" was just awe-inspiring. Also he's smoother about hiding it when he mixes up his lines. Don't worry, only the hardcore fans know how the new songs go. :)

Speaking of which, thanks for the shout-out to the wiki editors, John_Flansburgh. We love you too!

Cannot wait for the The Else show in May. If it's anything like the phenomenal 2007 Bowery Ballroom shows--and the way they knocked the stuffing out of "Withered Hope" suggests it will be--then we are going to have a fine, fine time.

I will always have mixed feelings about this show. The set list was great and they all sounded fantastic, but during the middle of the second set, this asshole I was sitting next to spilled his beer all over my sister and I. Total bummer.

I was recording this show though, and if you ever find a recording of it, I can guarantee you it's mine. That sounds fine, which I'm happy about.