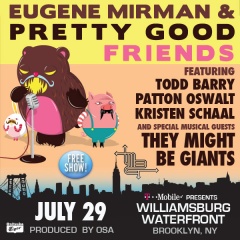 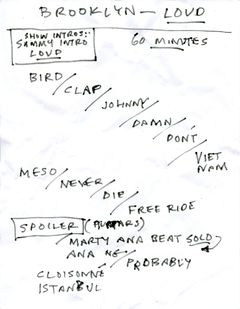 This show marks the last performance of Graveyard.

Sitting in line for five hours, getting DRENCHED with rain, and shorting out my phone was so worth seeing TMBG for.

There isn't much to say, except that Dan Miller's acoustic guitar went through a horrible audio mishap thus causing them to cancel Miller Time. Also, Marty downsized his drumset, getting rid of his splash, third crash, china, conga, and side snare. :3

Oh, and Cloisonne actually sounds pretty decent live! TMBG did some pretty good work on it. Though I think it was mostly the electronic drums and everybody getting used to the key change. And Danny Weinkauf's dancing when he's on the keyboard. :D

It was a totally awesome show. For some reason, I felt more emotionally connected to the band at this show rather than all the other times I saw TMBG.

My first time seeing TMBG since 2008, so I was pretty pumped for tonight. Rather short set due to the number of other performers on the bill and the 10 pm curfew at the park, but still a fun show. Also it was free!

I don't know when the line started forming, but I managed to get there around 2:45 and still secure a spot in the second row of seats for the comedy set and the front row for the concert itself. Flans was out giving out stickers at one point and I got one (along with a bunch of other people). The comedians in general fared pretty poorly, but the rain kind of killed things for everybody for a while, which led to the usual lame jokes about the weather being some sort of reaction to a particularly good or bad joke. (Flashbacks to Solid Sound Festival, where John Hodgman claimed to be able to make the thunderstorm stop...) Fortunately the rain stopped by the end of the third or fourth comedy guy, so that was good. (Did I mention Neil DeGrasse Tyson showed up, beer in hand, to answer science questions? HE DID, and it was pretty amazing.) Poor JoCo got limited to only four songs, and then TMBG went on.

Band was in pretty good shape tonight. Flans was congratulating those of us in the audience who stuck around for not being chased away by the bad weather, and proceeded to make fun at the expense of those who did leave. He also repeated his whole little "talking to Robert Siegel is like talking to god" bit from twitter, but Linnell went into this whole other thing about him looking like a child with a shaved head. Linnell seemed pretty goofy in general tonight; he was kind of dancing around a bit slightly offstage at one point. Cloisonne was great; it just keeps getting crazier and crazier live. "When Will You Die" is still an absolute blast to hear live too. I also enjoyed the lack of Particle Man, haha. "Spoiler Alert" by the Avatars was preceded by a bunch of the typical puppet banter ("happy to serve you", "menthols", etc.), but there was also some weird bit where Flans kept sticking his GIGANTIC HAND onto the video screen. (The Johns also seemed unaware that the audience couldn't see anything in color on the Jumbotron...it was all black and white). There's a bunch of stuff I'm probably leaving out, but I'm in the process of uploading my videos before I go to bed and fly home. It all felt way too short and was over much too quickly, and already I can't wait until they come to Ohio so I can see them again.

The comedy opening acts were really bad. I spent some of it hiding from the rain in the wine tent, but what I did hear was not funny at all.

I liked Jonathan's set, but the sound was just so-so.

TMBG sounded great, but the set was extremely short and a bit disappointing. The new songs were all excellent - I liked "Spoiler Alert" (thank goodness they didn't play that shooting start song) for the Avatars section. Really disappointed that they didn't play Puppet Head, considering that was where they shot the video. And with all the new songs and the obligatory 'hits' (Birdhouse, Ana Ng, Istanbul), they didn't get to play deeper into their catalog.

Can't complain too much as it was a free show, but looking forward for them to come back to NYC and seeing them play a longer show in a smaller setting.