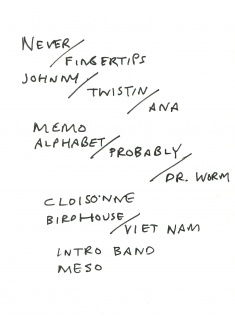 This show included the first live performance of "Cloisonné".

"I'm Dan" - Dan Miller
This was a really great show considering it was in the upper level of an apple store! I met with Kelly and Lekker (also present: Q, TDK, other folks, etc) before the show (and gave them some wristbands) and we were seated in the second row. The new songs were REALLY REALLY good, and everyone was tricked into standing up for "Judy Is Your Viet Nam" (and flans messed up the lyrics!). Linnell brought out the bass clarinet(!!!) for "Cloisonne", the horn arrangement was replaced with some handy guitar work. And a bunch of other things happened that I don't feel like thinking of because I'm sure someone else will instead. Afterward we all were hanging out in the store (wondering who had the most pictures of the bass clarinet) and Dan Miller came out and signed some things. Danny came out too but when we started swarming toward him he ran away, waving (in a terrified sort of way). After a little while longer, Flans was standing around too, and I got my new (new to me, at least) Flexi signed!!! he seemed excited to see it. Or something! This was a pretty bad recap but I'm sure you can read Kelly's writeup and gain a bit more.