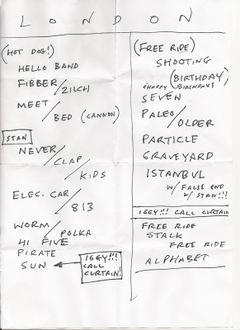 My first TMBG concert, 20 years after I'd first heard of them! Thankfully it didn't take another 20 years for my next as I went to the show for adults later that day.

Performing were the Johns, Marty Beller, Danny Weinkauf, Dan Miller and Stan Harrison (on sax from Never Go to Work & clarinet for Istanbul); with Mr Silver (a helium-filled flying penguin) and his friend, an octopus with a similar design.

Two types of T-shirt on sale afterwards along with The Else, Here Come the ABCs, Here Comes Science, the Spine and Flood CDs.

The concerts were part of See Further: The Festival of Science + Arts, a festival which was a collaboration between the Royal Society and the Southbank Centre (which the Royal Festival Hall is within)

During the concert I sat in the balcony of the hall and wrote down the song titles as they were performed (as best I could), then when it was over I went outside and uploaded the list here in the glorious Summer Sun.

Photos (if they come out OK) and a video of Mr. Silver to follow eventually. Maybe.

Compared to the later show, the kid show felt a little bit reserved - people mostly stayed in their seats, and Flans was distinctly unimpressed by our (lack of) shouting. This could have been because it was relatively early, because people were busy getting their children under control or because we were British and sober. It wasn't the guys' fault, though; they were as lively as ever! You wouldn't have guessed they were jetlagged if they hadn't mentioned it.

There were two floating silver animals hanging around the stage: a penguin which was resting on the stage when the doors opened at 1:40 but flew around most of the time afterwards, and a jellyfish which first emerged near the end of the kid show. They were basically enormous balloons, but with remote-controlled robotic frames so that they actually swam. Lots of people were filming and taking pictures of them while they were out. Some of the kids seemed more interested in them than the stage at times. At one point the penguin (Flans referred to it as "Mr Silver the Penguin, our new assistant manager") went directly above the stage. I don't remember the exact banter that ensued as they all stood still and watched it slooowly pass over their heads, apart from Flans joking that Victor the technician was wishing his aim had been better after firing the confetti cannons, so you'll just have to believe me when I say it was hilarious.

The only additional band member they brought with them to England was Stan Harrison, but he was seriously impressive by himself on saxophone and clarinet, and got plenty of solos.

Professionalism seemed to be the inadvertent theme of the day. When Bed Bed Bed was introduced, we were told that the band were professionals and would never go to sleep while performing... yet. Maybe when they're 60. It had the usual confetti and Marty's look of extreme concentration at the end. Later, one of the mics started making tweeting noises when Flans tried to speak. He initially blamed it on the penguin interfering with the wireless somehow ("Can we retire the silver object for the next song? Just one song. It's 90 minutes long.") but the noise happened again when it was off-stage. Cue Flans stepping away from the mic with his hands up, discreetly moving over to Dan's, and saying, "This next song has four themes: professionalism, pirates, girls and the number nine..." The other noticeable mess-up was when Dan started playing the opening to Electric Car and nobody else did, leading to the jetlag jokes.

A few things about individual songs:

I took photos at this show and hope to upload them whenever I get round to it, but we were sat exactly as far away from the stage as you could get while still being on the front row and our view was largely blocked by the speakers. I also tried to note down some of the funnier lines, which turned out to be pointless since by the time we got out, I'd forgotten what the notes were referring to. :( According to my friend, Dan, Danny, Linnell and Flans all gave us weird looks at various points in the show, but I missed all of them apart from Linnell's because I was scribbling - I don't know if she was right, but I'll be kicking myself until the next show I go to anyway...