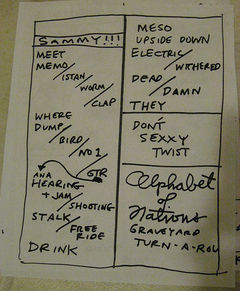 Setlist: (The first encore was cut from the show.)

This show was plagued with technical difficulties. The Avatars were performing from backstage behind a giant drop down screen and they lost the video image on the screen just before starting What Is A Shooting Star. They ended up singing the song from back stage with just some disco ball lights reflecting on the screen then scrapped the second song altogether. Someone also turned on the house music and the lights after the first encore when the band had clearly been intending to do a second, so that got scrapped too. Still a good show with a great setlist but it was a little tense.

This was my second TMBG show, and it was worth the 3-hour drive from Charleston, despite the technical difficulties. They had a trumpet player with them (whose name I cannot remember, maybe someone else can help me out here) who added a nice touch to a lot of the songs. From where I was, we could see one of the set lists taped up on stage, so I was fully expecting to hear "Don't Let's Start," but it never came. I think BlueCanary might be mistaken about the second encore not being played due to the house music being put on early, because the encore that wasn't played was listed on the set before the one that was actually played. So technically we got the second encore but not the first...I think maybe the guys just decided to call it a night. Like I said though, I could be wrong. Either way, the guys put on a great show and I had tons of fun.

Hey, you must have been standing right behind me! I was the one wedged in the corner by the inconveniently placed trash can. Hi! I actually heard Danny talking to the sound guy Will after the show trying to figure out what had happened with the encore. He told Will that the show wasn't supposed to be over, that they had just decided to swap the order of the encores on the setlist. It appeared a club employee made the mistake and it was too late to fix it since half the audience had left. Interestingly (or maybe not), this was the second night in a row Don't Let's Start was on the setlist in an encore that got skipped for one reason or another. Even without it, it was a really good setlist. Oh, and the trumpet players name is Curt Ramm. BlueCanary

This was my second TMBG show ever. First off, let me say that the Visulite was a very tiny, but wonderful venue. I got a spot right in front of Marty's drum kit. Jonathan Coulton was hilarious. He really outdid himself with his new version of Mr. Fancy Pants. There was about a thirty minute break in between Coulton and TMBG. When TMBG came on, it was so awesome. There were some songs in the show that I hadn't seen much in past set lists like Where Your Eyes Don't Go, Electric Car (Flans Version), and They Might Be Giants. As BlueCanary and MajinTrunkz said, there were some technical difficulties. There was a bunch of dialogue, and it was all so funny. Some of my favorite quotes are (these aren't exact, just what I remember) "This next song is off of our newest adult album, and by adult I mean porno" - Flans "You know, I remember the last show here, there was a lady who had had ecstacy for the first time, and she wouldn't stop yelling at us, and there was a point where I was like 'get out of my mind lady' and she would say 'what mind?'" With the exception of one drunk lady that was determined to get in front of me, the fans were pretty tamed. After the show was over, I thought that it might be smart to wait awhile and maybe the band would come out and sign stuff. Set lists were handed out (which I did not get) and the band never came out. So that ended one of the best concerts I've seen. With a diverse set list and a lot of funny dialogue, and it was a treat for the ears. Can't wait for the next round in NC!