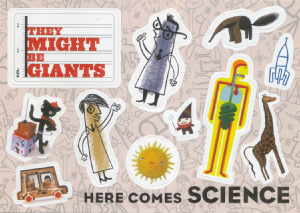 Stickers handed out by band members at the end of the show.

The wiki has an Avatars of They recording from this show.

This was the first TMBG show I have ever been to and I have to say I was not dissapointed at all! They were very on top of their game, and were way more electric than I thought they would be. There were a bunch of moments in the show that are worth mentioning. The first being toward the beginning of the show when John Flansburgh mentioned that the show was being recorded for a special live Halloween album. I couldn't read if he was joking or not, but if he wasn't, I'll be the first one to buy a copy. Second, I saw John Linnell taking pictures all throughout the show (with one of his archaic cameras) of the crowd, Marty Beller, John F., his keyboard, and I believe himself (though I can't recall if he did for sure). One of the funny moments in the show came when John F. was informing the audience that if they had any parental complaints about the show, than they could "place the complaint at duranduran.com...All of us being members of Duran Duran." At one point during the show, a screen was revealed at the back of the stage showing a wide shot of the audience. The camera (which was sitting on a bass drum that looked to serve no other purpose than to mount the camera on) was then turned to face John F. and John L.'s sock puppets. They called themselves "The Avatars Of They". This was also very entertaining and the crowd seemed to really like it. There is so much from this show that I could drone on about, but the winning moment for me was during the encore when they busted into "Birdhouse In Your Soul" at the request at a little kid who had jumped up on stage to ask them to play it. All and all it was a cool show, and if they are ever back this way again I will be sure to try and get there.

Hey, just had to mention their Halloween costumes. Amazing, really. Flansburgh had on some kind of furry hat & ears, prompting Linnell to call Flans a furry, while Linnell wore a skull mask. During "Pirate Girl Nine" Flans said that one of the Pirate Girls was a zombie, so we should say the count like: One Two Three Four BRAINS Six Seven Eight Nine". And before "Why does the sun shine?" they cautioned that there would be some lies at the end, and to address all complaints to duranduran.com. These aforementioned lies were in the last line: Scientists have determined that the sun is made of homonyms, synonyms, cinnamons, and BRRRAAAAAAAAAAIIIIIIINNNNNNNNSSSSS!!!!

This was my third They Might Be Giants show and it is different from their non-kids shows, but definitely not worse. They had a different type of energy that had EVERYONE laughing the whole show.

"We've saved the best part of the show for NOW. Which may seem entirely too soon. We come out strong then get slowly more and more boring. That's the kind of show we do, no compromises. Interesting at the beginning, boring at the end."

And yes, they had costumes on the whole time as did a lot of the audience. Very fun. Great show.

omg, what memories this show has. one two three four brains six seven eight nine. it's been almost nine years now since this happened but man it was so much fun. i remember being there near the front of the stage on the right. great times!

also this is such a stretch but to the kid i was talking about homestar runner with you should lmk who you are :^)