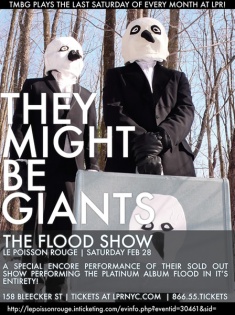 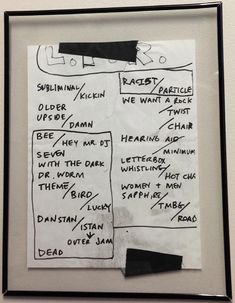 I'll start by mentioning the newsletter that described what this show would contain (in addition to the entire Flood album): "The band will start off the set with a series of songs guaranteed to delight even the most hardened recidivist." We spent much time discussing the meaning of this sentence before the doors opened. What is a recidivist? What causes them to harden? Does this mean the band will actually dig up some spectacular and classic songs for the opening set? The answers to these questions: I'm still not sure; playing Flood four times in about four months; not really. But I'm not posting here to demonstrate my hardened recidivism, I'm posting because the show was, as usual, nothing short of spectacular.
Though the setlist didn't contain too many real surprises, the band was in top-notch shape. The first thing to notice was that Linnell got a haircut--nearly of 1990 length. Perhaps this was to celebrate the Flood performance? We'll never know. "Subliminal" into "It's Kickin' In" was a fantastic two-fer, and a nice way to open. The band maintained plenty of energy throughout the show's length, and seemed particularly excited during the Flood set. Dan's "Istanbul" intro went on seemingly longer than usual, Linnell went into an innovative rendition of "Clap for the Wolfman" by Guess Who during "Particle Man" (which had Flansburgh on keyboard for the rest of the song--THIS WAS AMAZING), and the horns sounded beautiful throughout. I captured plenty of videos, and the link to my YouTube channel is in the top-right of this page. Overall, a great show with the greatest, friendliest audience ever to make it even more of a pleasure!