From This Might Be A Wiki
< Shows
4 wikians attended: Kassi Kford13 RLJohYouDid Zander 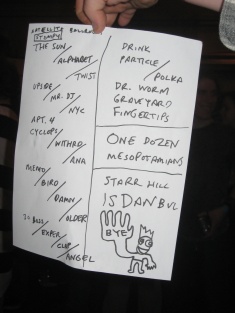 This was my 9th TMBG show, and it was interesting. As others have noted in shows during the previous week, Flansburgh caught the flu, and by the time the Charlottesville show rolled around, his voice was pretty well gone, especially his falsetto, and during the first half of the show, the energy wasn't quite there. It obviously affected certain songs too (for example, he didn't join in on the chorus of Birdhouse). On top of all that, they had also done two shows in Atlanta the previous day AND got caught in the tornados that hit Atlanta that weekend (Flansburgh said at the end of the first show in Atlanta, they were asked to keep performing to keep everyone from going out in to the bad weather).

That said, given that he had the flu and this was the last show at the end of this 3-week leg of the tour, I was beyond impressed how committed they were, especially Flansburgh, to providing a high quality show. And in spite of how Flansburgh must have been feeling, somewhere in the middle of the show, something clicked with the energy of the crowd, and they really picked it up a notch. Linnell seemed in rare form, too - was unusally in to the show, and smiled quite a bit. There was a nice spontaneous moment during "Older" when the band stopped briefly in the middle of the song and the crowd kept clapping in rhythm, and Flansburgh and Linnell sort of looked at each other in shock, and appeared to be really enjoying the moment (Flansburgh even commented on the clapping and complimented the crowd. Something like: "We're in a college town, so there must be a lot of music majors in the audience to carry out that impressive percussion exercise in perfect rhythm.").

The band had planned the usual two encores, but after the inital set finished, the stage apparently lost power. After nearly 5 minutes of cheering, the band came back out and Flansburgh told the crowd that they had lost power, and the band would "sheepishly hide backstage in professional shame" while they fixed the problem. The problem was eventually fixed and the band came back out and combined both encores in to one encore set, and seemed to give the encore a little extra energy to make up for the technical difficulties. They apparently added "The Guitar" which was excellent, and not on the original setlist.

All in all, a good show. I was disappointed not to hear "Puppet Head" or "It's Not My Birthday" two songs I have yet to hear live. The dual guitar solo at the end of "Withered Hope" was especially good, as was Marty's drum solo during the introduction of the band - he went absolutely nuts. Flansburgh kept yelling "He's destroying his best drums for you! Give it up! He's killing his drums! For you!" And Dan's 3-minute solo on acoustic guitar for Istanbul was the best I've heard yet. "Boss of Me" was the 30-second version, and "The Famous Polka" was played without lyrics.

Some of their usual funny banter too. After the room rattled a bit because of a passing train, Flansburgh said "In many ways, this venue combines all the worst parts of living in New York - standing in a crowded room, next to people you don't know, with trains passing by" to which Linnell responded "Except something has gone terribly wrong, because it's dark."

This is actually the third time I had seen the opening act, Corn Mo, and I really enjoyed him. The previous two times were just Corn Mo and his accordion, but he had his full band this time and it gave his music a much better feel. Great energy, great warm up for the crowd, who really responded. Corn Mo has come a long way in the 4 years or so since I first saw him.