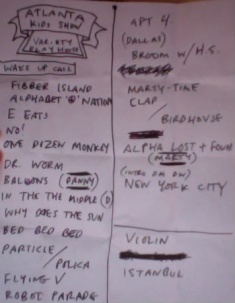 TMBG came out and played Violin for the encore, then one of the stage guys whispered something to Flans. Linnell asked him what he said and Flans responded with, "Well, I think the parents will see tonight on the news". It was actually a tornado passing by outside the venue, as later revealed by Flans at the adult show. Basically, they couldn't let anyone outside the venue, so they were told to keep playing. They added Boss of Me and 4 Of 2. I yelled Supertaster, to which Flans thought they could do it, but Linnell disagreed. They ended the show with Istanbul as planned on the setlist. Hope that clears things up.