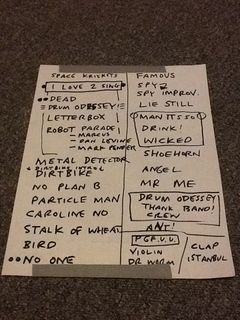 Mark Pender played some high energy trumpet parts. During one song they had the audience do a humongous conga line- everybody just grabbed the shoulders of the person in front of you. Attendance wise, the place was packed.

This was the "They Might Be Giants - Other Thing", no? It was a while ago (writing this on 10/25/2009), but I'm pretty sure about that. It was just John and John and Pender on stage for most of the show. Then Dan Miller (on an acoustic?) for a few songs. Much fun!

This show was much fun and it was fully TMBG Other Thing. Perhaps the first appearance? Flans introduces the full band with horns after Metal Detector, then there is some banter about Christmas, then before Dirt Bike he refers to the band as "They Might Be Giants Other Thing"- which is The Johns with Dan Miller - Guitar, “Manchester” Marty Beller - Drums, Marcus Rojas - Tuba, Dan “The Machine” Levine - Trombone, Mark “The Love Man” Pender - Trumpet. When Flans introduces Marcus Rojas he says he "will be the star of an upcoming show on the WB, Tuba Island, where all the tuba players in NY have to live on the island of Manhattan." or something pretty close to that.