From This Might Be A Wiki
< Shows
1 wikians attended: Aliste 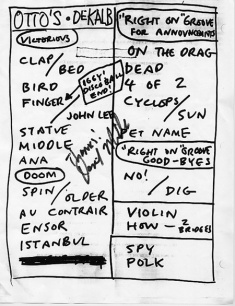 They Might Be Giants
— with Trachtenburg Family Slideshow Players opening —
Otto's in DeKalb, IL
October 28, 2002 at 8:30 PM

This was a great show in a small, very smoky venue. The stage was tiny and kind of jammed into a corner—so tiny that when the Trachtenburgs came on, Tina had to stand in the audience with the slide projector to get a good image on the screen.

The Trachtenburg family played 4 songs, three of which I'd seen at the McSweeney's shows (Look at Me, Middle America (Saturday only), and of course the OPNAD committee report of 1977), plus one called "Don't You Know What I Mean" (emphasis on "Know"). Rachel was wearing a headband with furry cat ears on it, which made me wonder what Dan Hickey would look like with fuzzy pink kitty ears...

Strangely enough, despite its being a 21+ show, I saw several children there, including a small boy next to me who seemed fascinated by Flans's shoes (the ones Dan Miller gave him).

The crowd wasn't great (and some of it got very drunk and obnoxious toward the end of the show) but the Johns were very talkative.

Before Bed Bed Bed, Flans was saying something and then he stopped short with a sort of glazed deer-in-the-headlights look. Then he said, "I looked out there and thought it was a sniper. But I guess it's a camera." After the song Linnell was adjusting his accordion and he suddenly stopped and got the same look in his eye: "I see what you mean...that red dot." JF: "It's the last thing you'll ever see."

Before Fingertips:
JL: I'm getting hungry... someone in audience: Italian food! JL: No, I'm in the mood for something special...human fingertips. (waves his fingers diabolically) JF: Some bands have special delicacies that are associated with them. Ours is human fingertips. This is a song that's called simply "Fingertips."

Istanbul:
JF: We're gonna ask you to do 2 things now. [The first was to snap. He tried to get Hickey to play some snaps for us on his electronic fake drum sounds thing, but Hickey couldn't find it. He tapped on a bunch of different things and made some random sounds and finally gave up. Flans suggested he just use the hi-hat and Hickey gave it a weak little tap and Flans looked disgusted.] The second thing is—y'know, people ask us not to swear, 'cause there's children here, but that's not our fault. Frankly, we think Child Protective Services should be called. Now, some people think the acoustic guitar is a candy-ass pussy instrument. Dan Miller is here to show you that's not true.

Dead:
JL: [something about Halloween. then, in a spooky voice:] Boo! JF: Yes, every day is Halloween for They Might Be Giants, because we're recently dead.

JF: [looking out into the crowd] Man, I thought there was like a 7-foot- tall robot back there, but I guess it's a : camera. Hey, you're blocking the people behind you. Get some pictures from different angles. There's like a 5-foot-tall girl robot back there going, "Aw, fuck, there's a 7-foot-tall robot in front me and I can't see anything."

Before Pet Name Flans told this long story about some guy in this month's Guitar World magazine who said his guitar influences were Richard Pryor and Secretariat. He said They'd decided that their influence from now on would be the Westminster Kennel Club. Linnell said they'd have to go back to the beginning and rethink everything they'd been doing.

I don't think I'd ever seen them do Spy before (unless it was back when I saw them in 1994, which I don't really remember), and it was pretty cool, especially when Flans pointed at us, the audience. But a bunch of people kept screaming "Particle Man!" After the song Linnell said they were gonna get back to Particle Man in Champaign (the following night) and Flans said we should all come. When people protested it was too far (2.5hr drive), he said they'd put us on the list if we went over to the merch table afterwards. "They give us 20, and we don't know anybody in Champaign." I really wanted to do it, but I knew I couldn't make it on a school night. (Class at 9:30 in the morning and I teach it, so I can't skip.)

Another thing I really enjoyed was toward the end, when Flans introduced all the Dans. When he said "Dan Miller," Dan Miller flung out his arms and threw his head back to receive the roar of "fuck yeah!" that came from the audience. I don't think I've ever seen him respond so much to the crowd before. After the show he came back out onstage for some reason and I heard one guy saying, "You're a very good guitar player," and Dan said, very politely, "Thank you," which for some reason made me laugh.

After 4 shows in 4 days...I think I'll be suffering some withdrawal symptoms for a while.

One other funny remark I wanted to mention. Before, I think, Statue, Flans made that comment that it was off their brand-new album Apollo 18. The guy next to me said, very indignantly, "New? Since when?" and Linnell heard him and said, "And the facetious remarks just kept coming, all night long."

I think Robin also gave Flans a haircut since Saturday, but he seemed to have the same facial stubble.