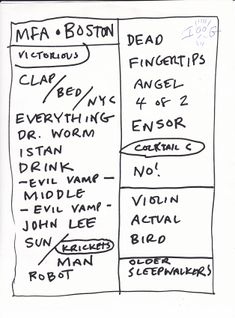 They Might Be Giants
Museum of Fine Arts in Boston, MA
August 17, 2002

JF: We're so happy to be here in this fine museum setting. This song is about where we're from...well, where we reside. It's not about Massachusetts.

Flans said they were "celebrating their birthday month", and the ticket said something about the anniversary as well.

JF: Sorry if we seem a little stunned, but we're not used to a sit-down crowd. Actually, we're not even used to a sober crowd...Dan Miller plays keyboard on this next song.

JL: He was upstaging us, so we had to handicap him.

JL: This song is about a segmented friend of ours.

JF: *wiping off his face* I was wondering when I was going to be able to use my fine arts degree, because so far it hasn't really done anything. But look...I can tell the difference between a towel and a cheesecloth. A cheesecloth like this is used in making casts and stuff and I don't think it exactly has the same absorbency...This next song is dedicated to all the people in the audience who don't say 'whoo' when we say 'This song is for all the alcoholics.' *cheers from the audience* See, it's not for you, it's for all the people who are quiet, cos they don't wanna talk about it.

They did the Dr. Evil intro/outro thing for Robin again, and Flans introduced her as "my wife", which I've never heard him do before.

Gases on the sun: copper wire, aluminum foil, wooden sticks. No estrogen, instead he did that "different suburbs of the town we're in" thing he seems to be fond of lately (this is the third time I've seen him do it).

Back to estrogen at the second show though.

JF: You know, in India, they cough on-mic. It's considered good manners. You can cough right in someone's face...I'm wearing a Gap shirt, and I realized that if you wear a Gap shirt on stage, someone in the audience will be wearing that same Gap shirt. So that's why you shouldn't wear Gap shirts on stage. (Our own Wolfie is convinced this was in reference to her, cos she was wearing a shirt very similar to Flans' and says he was looking at her quite a bit during the show.)

JL: Or maybe why you should.

JL: You know, playing in a museum is kind of destryoing our bad boy image. But it reminds me of the little auditorium people used to play at in our high school. This next song—

At this point there was a weird noise and then the power went out. Dead silence for a minute, and then the spotlights came back on but nothing else.

JF: How come you can get that to work but not this? ...Ok, how about we play some quiet songs? Is everyone ready for Kumbaya? (He leads audience singalong of it.) Does anyone have a flashlight, my lord? This actually happened at a show about a year ago—

Someone in the audience: I was there!

It took about 20 mins for them to get it fixed (I was kind of hoping they wouldn't cos they did some pretty cool acoustic stuff the other time it happened). Near the end the audience sang Kiss Me, Son of God Then someone yelled "Do Birdhouse!" and I yelled "We can't do Birdhouse, *they're* going to do Birdhouse!" A few people started it but then they came back anyway.

JF: We were singing the Rockford Files theme backstage. I don't know *what* you people were doing.

JL: This song—if I say the exact same words will it make the power go out again? It's like my memory's been wiped. Hey, if we were to do a singalong of the Rockford Files theme, how many people here would be able to do it?*pause* Ok, *no one*. Well, we got five guys on stage here who know the whole thing.

JF: How *were* you going to introduce the next song?

JF: This next song—

JL: It's the Rockford Files theme! No, I'm kidding. It's not that.

JL: *plays nifty little thing that sounds like something he got out of an accordion technique book or something* I just wanted to see if I could do that.

JF: We have a new album out, which is ostensibly a children's album, but it's like a Dark Side of the Moon for children. And this song was actually written for adults, but we had to take out the desecrated body at the end and make it into more of a Rip Van Winkle thing.

JL: I think a lot of kids would have actually preferred the gross version.

JL: There's not enough things culturally for little girls, because—apparently there's this thing where they found out girls like boy things but boys don't like girl things, so everything has to be for boys, and...I don't agree with that. So this is our little girl song that we wrote. It's about a clock in New York that was broken but to my great anger and disappointment they fixed it.

JF: We want to thank the spotlight guys, who we'll never meet. Shine the lights on each other, guys. Get a taste of your own medicine. How delicious. The pain of the spotlight...It's been a stone-cold gas playing here.

JL: I think we should do the wave. We can do it back to front or front to back...I just realized it will have to be front to back, it won't work the other way. (Each row of seats was a little farther up like in a stadium.) So we'll start it, and then when it gets to our lighting guy Iggy the encore will commence. I don't know why, that's just how it's going to be. And then after that you're going to have to sit down, cos if ever there was a song for sitting down, it's the next one...Or do whatever you want.

JF: There's no peer pressure. Just because there's a 7-foot guy standing up in front of you, don't feel obligated to stand up.

Flans is starting to get creative during the drum solos. "And speaking of how cowbells rock..." "To compare and contrast between Animal and the demure and lovely Buddy Rich, through an agreement with Buddy Rich International, to toggle, to meander, to cascade, to roll down the highway, to...switch at random between those two things..." "We've gotten complaints that Animal was not well represented. We've gotten phone calls from his lawyers."

Let's see, what else...John was wearing a green shirt with blue on the collar and sleeves (like the orange and yellow ones he has) and black jeans and he didn't have any coffee, just a bottle of water. After the show I saw an old couple being escorted backstage who I think were Flans' parents cos the guy looked a lot like his dad does in that picture. I tried to get John's setlist but the guitar tech came over and yelled at me and said I couldn't cos they were using it again. They didn't and it was gone when I got back for the second show so I was very upset...I know it had Sleepwalkers and a few other things on it that they cut (this is the 4th or 5th time that's happened to me with

Short comment on the following from the review above:

"JL: *plays nifty little thing that sounds like something he got out of an accordion technique book or something* I just wanted to see if I could do that."

Just wanted to note that that nifty little thing actually WAS an excerpt of the Rockford Files theme. When he asked how many people could join in the singalong, I was tempted to shout, "We can't sing it, it's an instrumental!" If I wasn't shy.... :)